Screams in the night: puppy pain and partner panic.

So I’m participating in NaNoBloPoMo or something (which means, “blog everyday for the month of November”) and I was nervous I wouldn’t have enough to write about. I got through the first three days but then I started to sweat. I went to bed last night feeling uneasy. 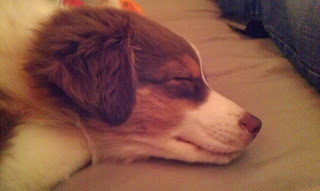 Then, in the wee hours of the morning, I was awakened by the soul-wrenching screams of my puppy, Corben. The cries were incessant and horrifying, and startled me out of a deep slumber.

I thought my instinctual reaction in a situation like this would be to leap from the bed and rescue Corben from whatever terror was hurting him. Apparently, my instinct was to start screaming, myself: a blood-curdling screech straight from the belly. Secondly, my instinct was to start wailing on my partner’s belly with a closed fist and a straight arm. Wham! Wham! Wham! went my arm, as I screamed into the pitch black.

Alan understandably arose very suddenly. He sat up and began screaming, too. I heard his scream and remember thinking that it sounded eerily similar to Homer Simpson’s scream.

The whole time the three of us were screaming, Alan was attempting to fend off my blows; somehow this involved kicking and throwing all the blankets off the bed. 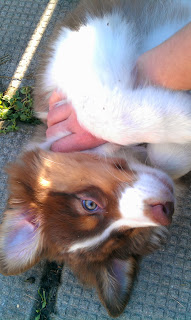 Eventually I guess we both managed to become coherent enough that we realized we had to get out of bed and help the dog. We flew to Corben’s crate where we found that he’d stuck his leg through the bars and had hurt it while flipping over in his sleep. A minor push from Alan got the leg back through the crate without any harm. We let him out and I cuddled him on the floor for a while until Alan took him outside for a quick pee.

I stayed on the floor, shivering with adrenaline, half-crying, half-laughing. The tears were for the absolute terror of thinking my dog had been injured; the laughter was because I kept replaying Alan’s ludicrous screaming and flailing in my mind’s eye.

My roommate Bruce woke up somewhere in there but went back to bed with Alan’s reassurances that all was well. I caught him on his way out the door the next morning and apologized, explaining what had happened. He said the screams had initially jolted him out of bed, but what had kept him up was the strange sounds I was making while the dog and Alan were outside: the sobbing, hooting, cooing sounds that can only be produced by someone who is simultaneously wracked with hysterical sobs on top of hysterical giggles.

Sitting on the floor at four in the morning, holding my dog and unable to look my partner in the eye for fear of hyperventilating from laughter, I realized I will be just fine for writing material this month.