The soundtrack to my life is now a constant symphony of squeaky toy sounds. 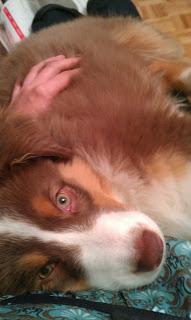 The puppy is a fiend for squeaky toys. He does not, however, have a very long attention span. I suppose, once he’s determined he has officially killed the plush wart hog/ bunny/ fox/ bear, he is no longer interested in that toy and wants to find a new one.

The only toy he does not tire of, is my shoes.

He’s also regressed a bit on the potty training; we’ve been working on it all week, so now when he has an accident, I’ll say, “No no no, puppy…” and before I say anything else, he runs to the back door to scratch. It’s a process. I get this.

What I do not get is why he insists on eating all the bark off of the firewood pile in the backyard. I pull it out of his mouth as fast as I can, but he’s unstoppable. Today I looked over at him in the yard and he tried to look casual while chunks of wood kept falling out of his lips.

And of course, we had our first ‘table surfing’ experience, wherein a dog finds food on a high human surface. The food was a giant chocolate birthday cake that I’d just unboxed; I turned my back to get the candles, and next thing I knew, there was no icing on the front side of the cake. Lucky for him, these things are mostly ‘chocolatey’ coating and not real cocoa.

I can’t blame him: the icing is my favourite part and I’d happily do the exact same thing, given the chance.

What compensates for the constant vigilance, worry, frustration, and wood splinters, is the moments when I sit on the step and he climbs up in to my lap, then curls up like a cat. That won’t be as cute when he’s sixty pounds, but for now, it’s my favourite thing in a day. 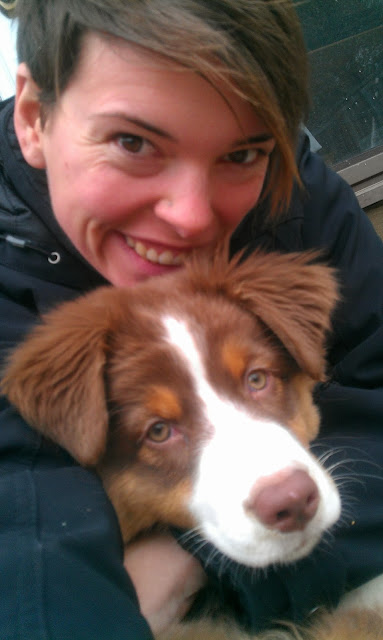