When to Boycott a Book: boycott success and retrospective

Regular readers of the blog will be aware of the recent controversial boycott (part 1 and part 2) by Ottawa's Comic Book Shoppe on Bank Street, of the famous sci-fi author Orson Scott Card. Card, in a nutshell, is an outspoken homophobe who has actively petitioned for GLBTTQ people to be denied equal rights like same-sex marriage; in fact,  he's gone so far as to refer to non-hetero people as 'genetic dysfunctions'. The Shoppe decided to boycott an upcoming Superman series that was to feature Card's writing. The book would be available for special order only, and this caused a flurry of public support and outrage. Other shops across the continent participated in the boycott, and a petition was even formed (garnering over 16,000 signatures) to have Card removed from the comic entirely.

BIG NEWS: THE ARTIST BACKED OUT.

Well, the big news broke this week: Card's artist, Chris Sprouse, has bowed out of the contract. Sprouse has stated that due to the level of public rebuke for this project, he asked DC to let him out of the project, and DC obliged. This is pretty fantastic, and good news indeed.

But is it a big deal?

I caught up with Shoppe owner Rob Spittall this week and he stated that he was amazed by how 'big' this had all gotten. For him, this was a small, logical stand against a hateful man writing, ironically, for a hate-quashing superhero. For him, the effect the boycott and petition has had is a big deal. For him, the outcry by (I'll say it) unenlightened individuals was a big deal, as was the deluge of positive emails, drop-ins, and facebook messages. When he told me it was feeling like a big deal, I looked at him quizzically and said, "This is not a big deal."

But here's why I said it.

As a person who came out around age 14--well over half my life ago now--this is not a big deal. Because when you're queer, every day is another socio-political minefield, and conversations routinely can get as heated as the Card conversation has been. As a bisexual, when I announced my engagement to a male over Facebook, even that happy news was marred by comments like, "Finally, you found a good man to straighten you out". Comments followed that supported my bisexuality, as did scornful comments about being over-sensitive. This is one tiny example of how a gay person's life is, daily, a lot like the Card debate.

As a person who also spent her teens and twenties actively working in GLBTTQ rights advocacy groups, I'm also used to making a public stink that elicits response from the media and haters. I have stood at the front of a room to provide a GLBTTQ sensitivity training to a team of rural social workers and had questions asked like, "Who sexually assaulted you as a child that turned you gay?" I have been on the cover of the local gay paper and my parents dealt with the fallout from homophobic peers who said terrible things right to their faces. None of this is new to me.

But it's new to Rob.

Rob has self-identified as a straight man. He also happens to be financially sound and white, without a visible disability. He is what our culture calls a 'privileged' individual. Not his fault, of course; but this is one of the first times he's used his stature and role in the community to affect change for a minority group (on such a large scale). This is his first time stepping into the laser sights of the homophobes, religious zealots, and backhanded media. And he's amazed at how 'big' this has gotten. 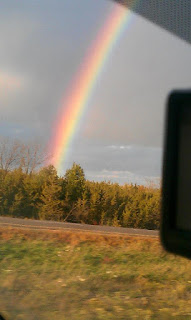 I feel bad for telling him this wasn't a big deal fight. It was, and it is. I forgot what it was like, in my early years of queer advocacy; how I'd emerge from a sensitivity training drenched in sweat, or how I'd be harassed on my lunch hour by a coworker asking incredibly lewd questions about my sexual activity 'just because he wanted to understand how girls have sex with each other'. I forgot how much it hurts to see people you thought were good people say bad things.

At the end of a bad day of being gay, though, I would go home and tell my queer partner all about it; I would go to the Icon (long-gone gay bar) and work it out over pints with my drag queen friends; I would do crazy things like get a series of rainbow paw prints tattooed on my back to remind me to always be proud of my identity. Rob doesn't get that same relief exactly, because he's standing up for a community he's not part of. His battle has been far more isolating in some ways.

Maybe what I should have said is, it's a big deal--but it shouldn't have *had* to be. And sadly, it's close to a normal day for many queer people.

Rob has written a statement to wrap things up that you can find on the Shoppe's fanpage; for more discussion on the topic, you can request access to their group page, too; check it out. Then lend your reciprocal support to this business next time you find yourself itching for a new graphic novel or awesome nerdy tee shirt.