Continuing with my six weeks of no dairy dieting (in an attempt to reset my lactose tolerance) I made quite a few new things this week, and discovered some deliciousness that I will undoubtedly keep making even after I can partake of the dairy again...


I found this recipe on Pinterest (and you can see a bunch of other dairy free things I found on there, too). I followed it to a T, and it was fantastic. I don't eat a lot of french toast but when I think of what it's like, it's always sorta gushy mooshy eggy grossness. But this was wonderful. The coconut milk was a great flavour, and the oatmeal encrusted on the outside got toasty and crunchy. I really will be making this again, and I don't think I'll ever go back to the original style. Oh, and for beginners: this was my first time making french toast and it was dead easy! Note: only substitution was that all I had was spelt bread, sliced normally, so that may change your experience. 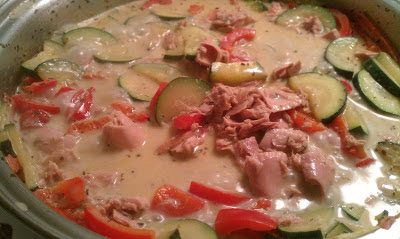 
I got excited about coconut milk, so I made a stir fry just by thinking one up. I honestly couldn't believe it worked out--I was totally prepared to run to the store for a salad or something--but it was great. I just cut up a zucchini and a red pepper, sauteed them in coconut oil, then tossed in a half-can of coconut milk. I realized I needed protein, so in a moment of great daring I threw in a can of tuna. I didn't really think that it would be a good flavour comibination, but it was! To help it along, I crushed up some coriander seeds and threw in some other herbs; I'd tell you what they are but I stopped labelling them a while ago so now I just sniff them to see if I think they'll be good in the mix. I made a batch of tri-colour rice, poured this over top after the coconut milk reduced down, and voila. Simple and fast dinner. Note: sorry there's no nice picture of this on a plate; it was so good I forgot to take a picture, even the next day when I ate the leftovers for lunch. 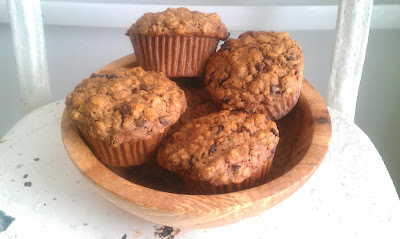 While I continue my loathsome dairy fast, I made up a batch of muffins that I've already been making for a year or so now, but with a twist. This recipe comes from my friend and food hero Jodi Turner, a nutritionist here in Ottawa who rocks my socks. 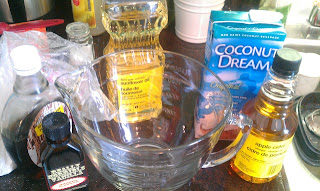 The recipe calls for spelt flour, which I ended up using, but usually I just use a whole wheat flour because I feel better about that than white flour, but the texture and moisture level is more what I'm used to. I also had to substitute one egg, as I needed two and only had one. I checked online and people said you could use a mashed banana instead, so I gave it a try; they turned out just fine! 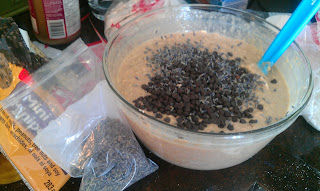 Makes about 12 large muffins
Preheat oven 325’
Prep a muffin tin with muffin cups or lightly spray with sunflower
oil or your favorite oil.

In a large bowl, mix together…

In another bowl, beat together…

Slowly stir the wet ingredients into the dry and stir together only
until incorporated. Do not over mix.
You may need to add a little water depending upon the refinement
of the flour…you want a nice moist batter.
At this point, you can add berries or nuts or whatever you like.
Scoop into muffin tin and bake 20-25 minutes. Cool and enjoy! 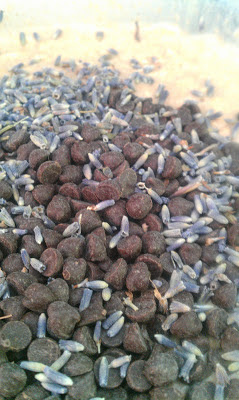 To make them more awesome, I added dairy-free chocolate chips, and a generous handful of edible lavender buds. They have a sort of minty-rosemary flavour and kind of make the muffins more 'grown up'. Plus they're pretty and people are always impressed. And they go with chocolate. And I feel like I live in Jane Austen times.

So simple, even *I* haven't been able to screw them up, and I've done every kind of substitution you can imagine as I forget to buy all the right ingredients!