A tent, a tantrum, and Italian shoes: random tidbits this week

TEN DOLLARS OF JOY: KIDS IN A TENT

A couple weeks ago, I had Blueberry and Max stay over at my house. I'm awaiting on the arrival of my new roommate, but in the meantime there was an empty bedroom and I found a kid's tent on Kijiji for $10. It seemed like a good opportunity to see how the kiddies would feel at my house, and I figured the tent would make it feel less strange. I don't think I was prepared for the aneurysm-inducing joy the children would explode with upon seeing the tent. Their eyes widened, they ran inside of it, they insisted on closing the flap and then opening the flap and then closing the flap and declaring they were hidden and we'd never find them--bear in mind I'd just opened and shut the flap twenty times for them.

Alan and I sat on the couch listening to them shrieking until two hours past their bedtime, when Alan went upstairs and gave the same lecture parents have given their children for years: "You're supposed to be asleep. You have been up here giggling and shouting for an hour and a half now. I've had enough. Blah blah blah..." you know how it goes. You heard it when you were a kid and not a word of it has changed.

I also took on Blueberry during one of her Terrible Twos tantrums. It was a stand-off about a winter coat, and because consistency is important, plus I refuse to lose to a human half as smart as my pug, I started and finished the fight. Poor Alan and Max stood there in abject misery while Blueberry wailed and I tried to keep her in a time-out. This was at the very end of their visit, so when the fight finished they were whisked away to the car and I swear, I don't remember the next couple hours at all because I think I was in shock; but I know the time passed because there was a trail of shellshocked tweets I'd sent, and the exhausted sympathetic replies of various tweeter parents. 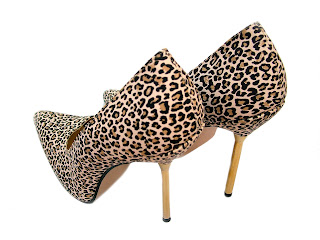 Also, I bought a fashion magazine. This is something I only do about once every two years, because a) they're bad for you, and b) I'm always 8-12 months ahead of the current trend. I was looking for kelly green dresses a year-and-a-half before they came out in stores. I wanted riding boots two full winters before they became the new fad. Unfortunately, now that they're all the rage, I'm on to new ideas.
Anyway, I arbitrarily picked up a copy of Elle Magazine, because it looked really focused on fashion and looked like it might be for the right age group. Well, it might have been the right age group but it certainly wasn't for the right tax bracket. I flipped through the ads (which are really the only useful part of a fashion magazine) and silently mouthed all the fancy designer names. Ferragamo...Gabbana...Chanel...brands where, if I saved for a year, I might be able to buy a belt, or one left shoe.
So anyway, I figured I'd look at the clothes because what I'd really bought the magazine for was to see what the hell is going on with spring fashion this year because it seems really confused and all over the place. Unfortunately, all these designer ads were showcasing their insane haute couture styles; so if I take it literally, we're supposed to be wearing giant hoop skirts and Guinan headdresses and absurdly oversized suit jackets. I may have to extend my research. Or maybe one day I'll just show up at work in one of my dad's suit jackets and a borrowed Little Bo Peep dress, and when my boss asks me what the hell I'm doing, I'll say I just spent $10,000 on this outfit so she should be impressed. I know the haute couture stuff isn't really supposed to be taken so literally, but honestly I couldn't see much in the way of actual, wearable concepts hidden between the awkward silhouettes and roman sandal-boots.  It may be a season to just avoid the shops. Or hey, just drink the kool-aid: hit the costume barn and be done with it.