I locked my door to sleep last night. Because apparently I have truly been relying on a small, fat, half-deaf pug for my security and peace of mind when I’m alone in the house at night. And now he’s gone. 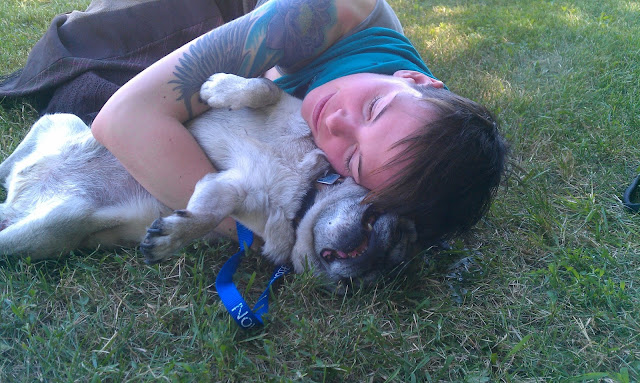 When Mr Darcy came home with us from the Humane Society, I sometimes wasn’t sure about him. He was a bit crazy, and he shed constantly, and he was the kind of stubborn where you have to yell to make him do anything. But his first winter with MJ and I, he fell through the ice of my parents’ giant pond while visiting them, and I remember running out into the pond to save him. I pulled him out of the ice like a superhero, sheets of freezing water pouring off him and down onto me. I dragged him into my parents’  house where they helped warm him up and laughed at Mr Darcy’s mortification. But I just sat there, in tears, because I had had the sudden realization: Mr Darcy had become an irreplaceable part of my life…the kind where I would perform heroics to keep him safe.
There was one time when Mr Darcy went mysteriously missing. MJ was away visiting family in Toronto, and at the time, we were living on the third floor, technically in an attic, above a hair salon down in Westboro village. Whatever I had been up to, I stopped to check on why Darcy was so quiet, and found he had disappeared completely. Once or twice I had taken him for a walk with me to Starbucks, entered in the north door, then exited the south door and forgotten him tied to the post on the south side. Both times I’d only gone a couple blocks before remembering and running back for him. Anyway, as I tore around the apartment in a panic, I frantically tried to remember where I may have left him that day; but we hadn’t been further than the back yard yet. I called MJ in hysterics and we spent a half-hour on the phone shouting his name, trying to figure out how a stupid fat pug disappears out of a third-storey apartment with the doors shut. While looking for a box of Kleenex, I opened the linen closet to find him sitting on a pile of towels. At some point he must have crawled in there for a nap and I must have shut the door on him. He serenely got up and walked out, head high. We laughed about this story while we were burying him at MJ’s farm yesterday.


The decision to put him to sleep should have been harder. The tumors that had plagued him for the better part of a decade had finally gone haywire, resulting in an emergency trip to the vet while I was in Vancouver; my parents had taken him in and gotten him some medicine to slow the spread a bit. I came home and I got a week in with him but it was hard on us both: he was bleeding from the big one on his leg, and I was constantly chasing him around with disinfectant as he trailed blood around the house. The smell of rotting flesh will haunt me for a while now, I’m sure. I tried fashioning pants for him so he’d let the tumor heal over again, but every time I left the room he’d pull a Houdini and somehow get out of them. The decision to euthanize became an easy one when I found him Friday evening, sitting in a bloody crime scene worthy of a Shakespearean tragedy; he’d decided he could no longer tolerate this tumor business and had partially eaten the thing off his leg. I cleaned him up in the bath, trying not to vomit, but both of us were miserable. If infection didn’t take him out, the flies would eventually manage to lay their babies in his wound and that would be much worse. This wasn’t going to go away. I had to save him that horror.
MJ and I took him to the arboretum where we fed him pastries and listened to a marching band. Early the morning of his death, we headed out to the airport where Darcy got to see planes taking off…his first chance to see just how big the damn things are and why chasing them across our backyard was never going to end well. Then we got him a Big Mac, fries, and and icecream, and let him eat ‘til he could eat no more.

Then MJ and I sat on the floor with him in the vet’s office as the doctor stopped his obstinate little heart.

MJ drove us out to her farm where she’d prepared a perfect little grave, dug deep and yet tiny. The three of us sat on the grass and we held him and cried for a couple hours. Other than forgetting Darcy outside Starbucks, this was the first time I’d be leaving him truly alone. Eventually we managed to lower him into the ground, with a picture of the two of us and a stuffed panda to keep him company. We poured the dirt over his grave and I told him I was so sorry he had to go. I just kept saying sorry and I still can’t stop.

I came home and began scrubbing blood off of every surface of my house. That, and the endless shed hair, is all I have left of him. It is the last evidence that herein resided the most stubborn, misbehaved, badass pug that ever lived. Also the most patient, funny, loving, and ridiculous pug. Also my best friend.

I had to lock the door to my bedroom last night, but it was hard because I always left the door open when Darcy wasn’t in my room so he could nose his way in. Which reminds me: I need to clean the scudgy nose prints off my door, too.

When we took him into the vet, I genuinely wondered if my heart would stop when his did. We have been inseparable for so many years. But my heart continued beating as his stopped; except, where there used to be the warm happy knowledge that there is always one creature in the world that adores me, there is now an empty black hole.

There’s no way to wrap this up, so I leave you with a poem by someone far more skilled with words than I am.

Stop all the clocks, cut off the telephone,
Prevent the dog from barking with a juicy bone,
Silence the pianos and with muffled drum
Bring out the coffin, let the mourners come.

Let aeroplanes circle moaning overhead
Scribbling on the sky the message He Is Dead,
Put crêpe bows round the white necks of the public 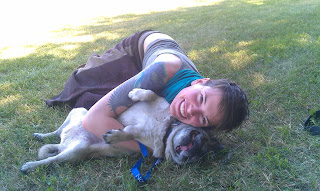 He was my North, my South, my East and West,
My working week and my Sunday rest,
My noon, my midnight, my talk, my song;
I thought that love would last forever: I was wrong.

The stars are not wanted now: put out every one;
Pack up the moon and dismantle the sun;
Pour away the ocean and sweep up the wood.
For nothing now can ever come to any good.