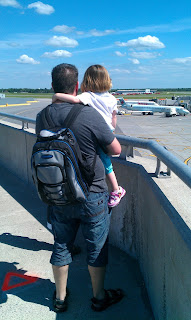 Travel day went well, I think. The kids were excited the entire time, and had absolutely no trouble with flying.
Alan is a rock, and very little seems to phase him, so that wasn’t a concern. Blueberry’s patience started to wear out around dinner time, though to be fair to her, I realized she was fussing at the restaurant because her old brother and her dad had stolen both activity placemats to play with. After a short time on the second and longer flight, Blueberry was fast asleep—which was a blessing, because we lifted off about an hour after her bedtime.

On the second flight, Max kept reaching out across the aisle to hold my hand. I figured he was nervous because the second plane was so much bigger than the first, with louder sounds and way more people. I kept swallowing my own fear of flying to look over at him with a big smile, which he returned every time. On my other side, I had Alan’s hand in a deathgrip and every bubble of turbulence, I grabbed on tighter. But for Max’s sake, my other hand was soft and gentle and comforting.

It was about halfway through our ascent that I looked over at Max and realized: I wasn’t comforting him…he was comforting me. Kids are smarter than they look. I asked Alan what was up, and he said Max had figured it out, and had decided to take care of me on the flight.

I fought back the sappy tears that started to tingle in my eyes. That such a tiny little human would try to comfort a full-grown woman…that I had earned that level of affection from this boy…the only reason I didn’t blubber was because I’ve cried on airplanes and I know my ears will never unblock. 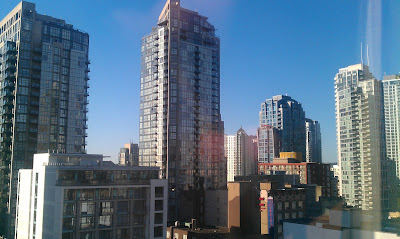 After picking up our Ford Explorer from the valet (which by the way, is a WAY cooler ride than the minivan, and I felt like a hiphop star or something), we set out of the hotel. We got into the hotel at about 3:00am home time (midnight local time), and the kids were exhausted but wired. Eventually everyone drifted off…then we all woke up, like clockwork, at 9:00am home time, 6:00am local time. I barked at everyone to go back to sleep, but then Max came over and whispered that he couldn’t do it, and I said I couldn’t either, so we all lay in the bed together and completely failed to sleep.

Blueberry is currently refusing to put on anything other than a pair of underwear, and I’m looking over maps. We’re off to Granville Island, then back here for Blueberry’s nap, when I suspect we will all end up passing out and further giving in to the jetlag.

But I swear I can smell the ocean outside, even though I can’t see it yet, and that’s super exciting.