DAY THREE: BY LAND AND SEA, THE SUNSHINE COAST

THE SUNSHINE COAST, AS SEEN ON FOUR WHEELS AND TWO PROPELLERS 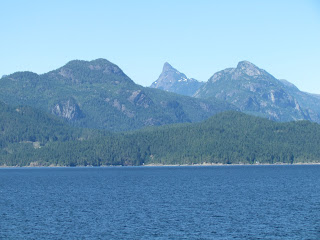 We headed out of Vancouver early on Monday morning to hit the road and head up to Powell River, where Alan’s sister and family were eagerly awaiting our arrival. After a few wrong turns, we eventually found the ferry…though we did miss the first one.

Happy to say, though, our Explorer saved our collective butts on the road; between the helpful GPS that didn’t keep losing signal (unlike my iPad), and the collision warning thingy, it got us there safely. The collision warning thingy (I have no idea what that’s called, but it beeps at you) went off when, three cars ahead, a pickup truck lost its cargo all over the road. It turned out to be nothing more than a large Rubbermaid bin full of egg cartons, but the cars in front of us all screeched to a halt and veered. This happened so quickly that we never saw it coming, so when the warning beeper went off, we were able to engage the brakes and avoid the whole mess. So as much as I always say thanks to Ford when they lend a vehicle, I can truly and warmly say a big thank you to Ford Canada for how helpful and neck-saving this one is. She’s as useful as she is pretty.

The pictures of our journey speak for themselves; it was five hours of scenic beauty. I don’t think I’ve mentioned this yet, but I’m originally from BC; my parents had moved out here when I was little to open an art gallery (Aboriginal art, fairly traded before there even was such a thing). In a little town called Smithers, I was born and raised for the first few years of my life. I have no real memories of the place, but this is my first time back. 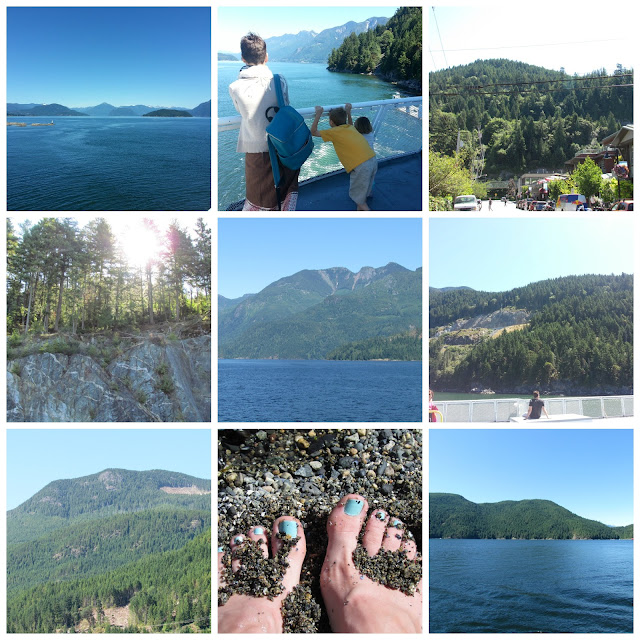 It felt like a homecoming. I fell in love with the mountains when I visited Banff a few years back, and I’d previously fallen madly in love with the ocean on my various trips to the Caribbean…but in both cases, something was always missing. Here, where the mountains touch the sea, I felt like I’d found what I’d been looking for. And I didn’t even realize I’d been looking for it. MJ texted me and asked how BC was, and I wrote back, “So pretty. I feel like my bones know they’re home.”

I was almost resentful when the ride ended and we’d arrived in Powell River. But then it was off to meet Alan’s sister and her family, and I was intrigued to see the woman who’d known my sweetheart before he was all grown up. The reunion, after years apart, was touching, and everyone is really great. They’re so warm and inviting, and down to earth. They pulled Max and Blueberry into their way of life in about five minutes. This is pretty close to miraculous: Max and Blueberry have, from experiences beyond Alan and myself, grown up as fairly anxious, rigid little people. They can’t stand being sticky, they don’t get dirty, and they don’t stray much to play on their own or do daredevil things. Max has anxiety troubles that can, at times, rival the worst I’ve ever seen. But in about three heartbeats, the family had these two kids in the water catching stinger-less jellyfish, holding spider crabs, and picking up seaweed. 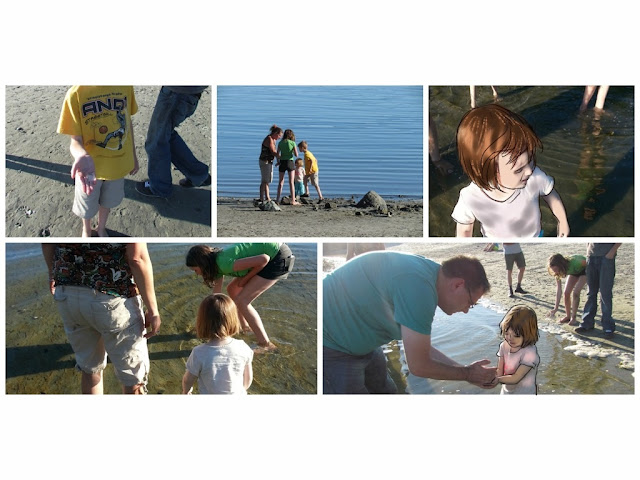 I think the coolest moment was when Max’s sixteen year-old cousin, Tony, showed up and asked Max if he’d like to try longboarding. (For those not in the know: longboards are long skateboards, used for speed and carving and other fast and dangerous stuff like carving downhill on long strips of road.) Max said no, but I assured him longboarding was about the coolest thing ever. A few minutes later, I looked around to find Max and saw that he and Tony had moved to the paved pavilion, and Max was learning to longboard. 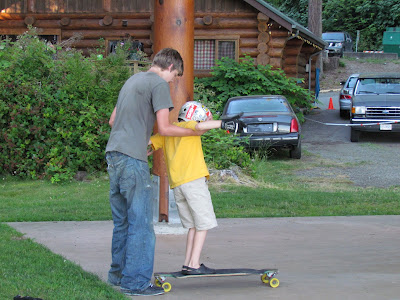 I laughed and I think I may have cursed. And what was Blueberry doing in the meantime? Smashing open mussels and feeding them to fish. I looked at Alan in that moment and just saw such relief in his eyes, that his kids were opening up to the world and letting new experiences in. He looked six inches taller and fifty pounds lighter. And that moment, alone, was worth the 3,000 mile trip. 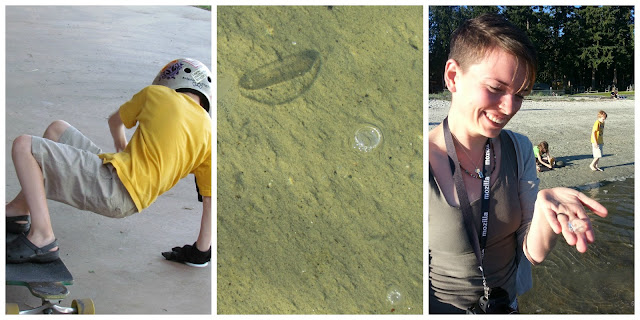