Girl, Crafted in BC: Day Two: Granville Island and The Fish Shack

By day two, the jetlag seemed to be wearing off and we all woke up at an appropriate local time. Shortly after breakfast, we hopped in a cab and headed down to Granville Island, one of Vancouver’s hotspots for art and funky shopping; it reminded me of Ottawa’s Byward Market if it was cleaned up and there were ten times as many cool shops. 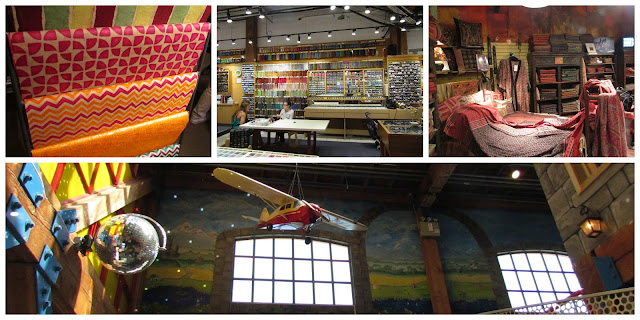 We started off in the Children’s Market, which may or may not have been a good idea, as everything else seemed to pale in comparison for the kids. This large, funky building contains nothing but kid stores—kid clothes, kid toys, and even a giant climbing structure with tubes and slides. Most of the stores in here seemed to carry commercial mass-made goods, though we only got through about half of it, so it’s possible the second level had the local producers. Nevertheless, it was pretty darn cool and I could see taking kids here as a reward for a good report card, or as a birthday outing. 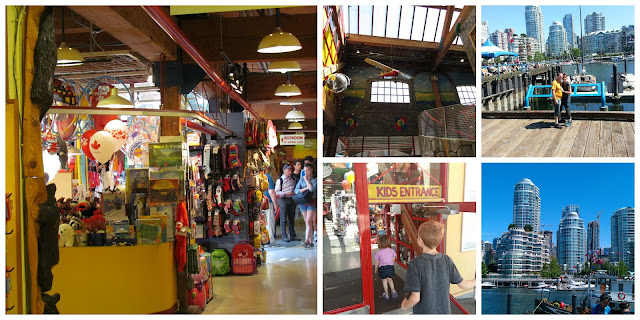 We wandered the island after that, stopping in various shops that appealed to us. A store called Maiwa carried goods from various parts of the world, including some incredible handspun yarns, and a giant cabinet rife with hand-carved wood buttons. Other shops carried local aboriginal art and sculpture, and others carried handmade goods by non-first nations people, too. I swooned over several incredible scarves and shawls made of unique raw wools.

I wanted to see the Public Market, so we found the appropriate building and went in. Inside, this market is a mishmash of local produce and artisans; I don’t know which was cooler. I bought some cherries from the Okanagan, then stopped to chat with a few artists. My favourite for the day was a painter named Olga Sugden/ Golden Egg Studios, who does very illustration-like paintings of girls and animals. I bought an art card from here, but think I may be calling to order something else later on, when I get my house in order (a story for another time).

Everyone got hungry all at once, so we were about to look for a restaurant when I suggested we make our own picnic. Alan and I whizzed through the aisles, gathering locally-made kielbasa, rosemary ham, salami, and bread, and a hunk of extra-mild mozzarella. He assembled sandwiches for the kids while I taught them how to shuck peas from giant pods. We sat by the water, listening to local minstrels and taking in the skyline of the bay. 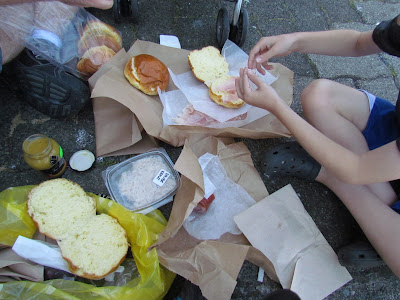 After lunch we headed back to the hotel so Blueberry could have a nap, and Max and I went to Starbucks, then did some yoga together. I don’t know if it’s the jetlag or the altitude, but neither of us could keep our balance in the warrior poses so we kept falling over and laughing.

We scoped out Urbanspoon for some dinner recommendations and ended up choosing a place called The Fish Shack down on Granville Street (which isn’t on Granville Island—don’t get lost). This neat, narrow restaurant has some really cool design work, including a wall of raw wood palettes. 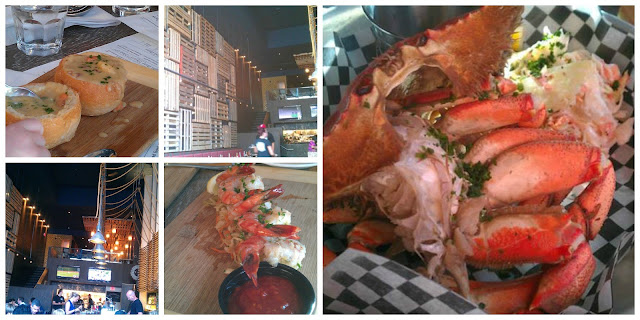 The kids ate spaghetti with meatballs; Max said his was the best he’d ever had, but Blueberry was in a mood so she insisted on eating my crab. And what a crab I had: a giant BC dungeness crab served, shell and all, with a side of slaw. The meat was incredibly mild and delicious. Alan tried lobster tacos, which were equally delicious. The General Manager, Todd, helped us out with the hungry kids by bringing some appetizers to start: two mini-bowls of scrumptious clam chowder served in bread bowls, and some chilled garlic prawns served on a bed of shredded veg. My only regret was that I didn’t try the red snapper burger, so we’ll have to come back. Oh, and Max was furious we didn’t get him dessert. Next time! 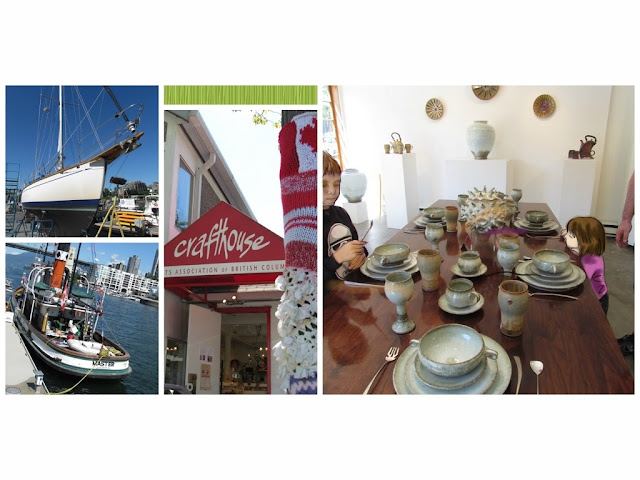 It was a lovely metropolitan day, and we got to see a lot of very cool things. Settling into the new hours and routine, everyone did great and the hell of the flight day seemed a million years away. If there was a hitch at all, it was when Blueberry walked, Bugs Bunny-style, head-on into a lamppost. Max and I were ten yards ahead on the sidewalk and heard the WHONNNG of her little head and body making contact, then turned to see the shock on Alan’s face, as he’d been holding her hand. Alan managed to keep a straight face while he comforted her, but Max and I had to hold each other and turn our heads to hide our laughter; it was just such a perfect cartoon moment. When Alan carried her over to us, I reassured her that I do the same thing frequently, especially when there are lots of new things to look at. By the end of dinner, she’d forgotten the whole thing and almost did the same routine several more times on the way back to the hotel.

SONG OF THE DAY: