Over Christmas holidays, my dear friend and single dad, Alan, got sick. This is Part II of my day acting as substitute parent while he was bedridden. You can read Part I here. 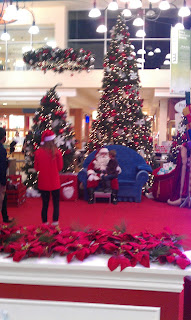 The tree was brought home and assembled, and dinner was eaten. The last trip out for the day was to take the kids to Santa Claus. Alan was insistent that this happen today, and that he get to come along. I compromised, agreeing to bring him if he promised to let me drive and not to lift anything. I dressed my three protégés in their winter gear and took them all to the mall.

The Santa encounter was magical, the kids had a great time, and Alan was so happy to have been there even though he could barely stand upright. Again, I felt super; I had rounded up the whole family and got them to Santa! I was a hero! Yes! Parenting is fun! While Alan ran into the pharmacy for something, I played with the kids in the mall corridor, spinning them in circles by their hands.

Blueberry loved this, and was squealing with joy while I spun her around. Unfortunately, the squeals of, "More, Jordan! More!" changed suddenly to, "I'm peeing! I'm peeing!" I stopped spinning her around and looked down. Poor Blueberry, new to potty training, had been so excited by spinning that she'd peed. A virtual lake of urine soaked the floor in a circle around her feet. Her pants and boots were saturated. And to make it worse, Max was loudly narrating the whole thing, much to the entertainment of the old people sitting on benches along the hallway.

Alan was nowhere in sight and I knew he didn't have his phone, so I thought quickly. I told Max to stay right where he was so that he could tell his dad what had happened. Then I scooped Blueberry up in my arms and ran across the mall to the bathroom, all the while murmuring, "It's just pee, sweetie. No big deal. Just pee." Of course, my OCD brain was screeching at me, “Dear God, it’s PEE! PEEEEEE!” Blueberry calmed down once we reached the bathroom; she kept explaining to me how she'd peed and how soaked her clothes were, which was unnecessary as I had evidence of that running all down my jacket now.

I stood her on the counter by the sink and stripped her from the waist down. Her clothes were way too soiled to be dried with paper towel and there was no hand dryer. I wiped down her wet little body, but I had no idea what do to next. Women came in, used the sink, and stared curiously from the corners of their eyes, but none of them offered assistance. They assumed, I suppose, that I was Blueberry's mom and that I had some sort of a clue about parenting. They assumed wrong. "What are we gonna do, Blueberry?" I asked. Blueberry shrugged and said, "I dunno." I fought the urge to grab at the women around me and beg for help. 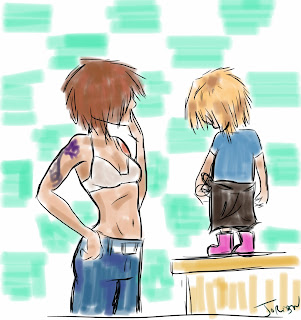 Alan tried to stick his fevered head into the bathroom and offer assistance but I shouted at him that we were fine. I started sweating.

Well, I did the one and only thing I could think of. I stripped off my jacket and my hoodie, then pulled off the black spaghetti-strap tank top underneath. Standing there in my bra, I asked Blueberry to step into the neck of the shirt, then I pulled it up to her waist and tied the straps so the shirt worked as a sort of long black skirt. Blueberry examined my handiwork and we both agreed she looked very pretty in a skirt. We put the wet boots back on, but the child was otherwise dry and warm enough to make it out to the car. She sashayed out of that washroom like she was wearing a ballgown, walking right past her dad and heading back to wave once more at Santa. Alan stifled a laugh as he noted that my hoodie was zipped right up to cover my nakedness. I raised my eyebrow and said, "Tread softly. I am covered in pee."

I sat on Alan's couch, unmoving, for a solid two hours after the kids went to bed. I have no idea how you full-time parents do it. But it's funny how these sticky, germy, incontinent, seemingly inebriated little humans can grow on you. Because the next morning when they returned to their mom’s, I missed them.

You know. Just a little.