PARENT FOR A DAY

Over the Christmas season, I spent a lot of time with my friend of ten years, Alan. Alan is a single dad with two charming mini-humans, named Blueberry (2.5 years old) and Max (8). A few weeks before Christmas, Alan planned a weekend of Christmas activities. We started with the cookie dough Christmas ornaments (you can check out the tutorial here), and the next day we planned to go buy a tree and ornaments. The weekend would wrap up with a visit to Santa Claus at the mall. Ornament night went off without a hitch, but the morning of the tree-and-Santa day, Alan woke up incredibly sick. As a single parent, being bedridden is a particularly challenging situation, and Alan was determined to follow through with the planned adventures, even if he had to slouch over the steering wheel like some sort of zombie. I couldn't allow this, of course, so I did what any insane person would do: I offered to take over the parenting for the weekend.

I may need to reiterate here for new readers: I am NOT the mother-y type. I have never fawned over a newborn, carted a doll around in a toy stroller, nor have I really been in charge of a child's welfare, other than babysitting as a teen. But I couldn't let the kids' Christmas fun be cancelled, so I said I’d be substitute parent for the day.

THE SEARCH FOR THE TREE

Max and I spent the afternoon tracking down a purple Christmas tree. It was my own fault for mentioning they make them in purple. The day started out full of energy and excitement, but as each store in the area turned out to be purple tree-less, the adventure became more arduous.

The first store, Max ran alongside me 'til we found the tree section, only to discover they were sold out of purple trees. We decided to hit another store. 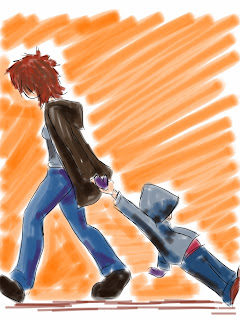 The second store, Max walked a few steps behind me to the tree section. No purple trees. I showed him  a white one: nope, wouldn't do. We decided to hit another store.

The third store, Max dragged his feet ten yards behind me. No purple trees. He insisted on another store across town. I drove in silence, worried that I'd overpromised on this purple tree thing.

By the fourth store, Max fell asleep on the drive and I stood outside the van for ten minutes when we stopped, reluctant to wake him. He was crabby, but he got up and I held his hand so I could basically drag him through the store.

When we rounded the corner and saw the purple Christmas trees, stacked and ready to go, Max's face lit up. We did a dramatic high five and I hugged him and spun in a giant circle. I did it! I'd made a kid's Christmas wish come true! I was an AWESOME substitute parent! Of course, I was only half-way through the day…

SONG OF THE MOMENT: I Won't Be Home Fro Christmas, by Blink 182