I have blogged this recipe previously on a different blog, but I have a major craving for it, so I'm revisiting the recipe again and sharing it with you all. You will LOVE this, people. Give it a try.

YOU WILL NEED:
Blue cheese--I had this lovely hunk from Glengarry Fine Cheese at the Farmers' Market. Let's say a cup.
Kale--a bunch. I have no idea how to measure kale. I suggest it be totally dry. This was fresh from my parents' garden!
Sunflower seeds--a big handful, maybe two. Hulled, unroasted, unsalted.
Penne--I used whole wheat because it was on hand.
Olive oil
Feeds 2-3 with the amounts stated here.

1. Boil water and throw in your penne when it's boiling.

2. While the pasta is cooking, heat a non-stick pan to medium heat. Toss in your sunflower seeds and swoosh 'em around with a spatula for a very brief time. When they start to go toasty-coloured, decide if you like the look of them, then immediately get them out of the pan before they burn. I had to do this step twice because I waited too long and burned the poor darlings.

3. The pan will now be lightly oiled from the seeds, so it's ready for the kale: I tore the kale up with my hands into bite-size pieces, and just threw it in a big mess into the pan, still on medium heat. Stir and flip it around regularly. The kale will wilt and crisp a little. When you think it looks tasty, pour it out onto the plate beside the sunflower seeds. 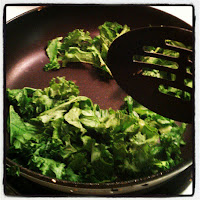 4. Crumble up your blue cheese. I only used about a half-cup, but I bet more would be even tastier.

5. Drain the penne when it's done cooking. Then before it cools, throw the seeds, the kale, and the cheese into the pot, too. The cheese melts and gets a bit gooey, and the kale and sunflowers get all mixed in. Add a tablespoon of olive oil to the mix to help things be tasty.

OPTIONAL: You can add spices. I'm sure some rosemary and maybe some lemon zest would have been lovely and I may try that next time. 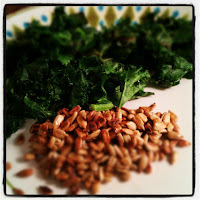 OPTION 2: You can toss in some meat if you like, though it's not required. I did add a bit of a Bearbrook Farms kolbassa just to try it out, and it was delicious. (The kolbassa is not to be missed and can also be grabbed, like the blue cheese, at the Ottawa Farmers' Market.)

Serve and enjoy! Because the recipe is so simple, it's easy to make just enough: measure your pasta as you always do, then just put in a serving's worth, per person, of each other ingredient. Simple! 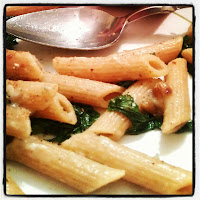 I made up this recipe based on the ingredients I had available, so my parting advice is just to relax and have fun. I find that sniffing things will often help me decide what flavours might go well together; your nose can be even better at determining flavour pairings than your tongue. Be brave, try something new, and just keep a frozen pizza on hand in case things go wrong.