When I was about nine years old, my mom went on a Christmas ornament-making binge. This in itself isn’t unusual; Mom is very creative, though she doesn’t let it out nearly enough, and Christmas has always been an opportunity for her to shine. I remember that particular Christmas, however, because that was the year of the macaroni angels.

Mom slaved away for hours. Days, in fact. At the end of it, she had produced several dozen perfect little macaroni angels, made of four different kinds of pasta, white enamel paint, and wooden beads. I was too young to understand why I wasn’t allowed to help with this specific craft, and I have wanted Mom to do this one again now that I’m older and am certain I would be a better helper. So last Christmas, as the last two surviving macaroni angels were visibly chipped and damaged, I demanded we craft these anew. With a turn of good luck, Mom found the right farfalle, and we were good to go!

In the end, this craft took:
-three days of crafting
-four adults working on them
-one-and-a-half tubes of smelly glue
-enough ingenuity to create something far more useful, like a cold fusion machine.

Let me walk you through it.

-roll the head in the gorgonzola, after applying glue to the head, to make hair,

-glue on the farfalle wings,

-glue on the macaroni arms.

2. Let them dry, preferably for a couple days to be sure the glue is set and isn’t off-gassing. 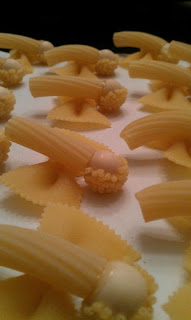 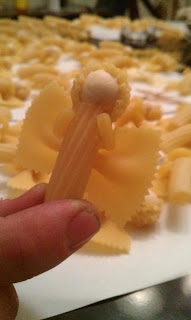 If you are a sane human being, you will make one, maybe two dozen of these. You will do it in a well-ventilated area. If you are absolutely nuts (or are aiming to become nuts), you will assemble 100 of these angels; you will also do the gluing part all in one go, on a cold day when it sucks too much to open a window. You will do it with your mom while your sweetheart and your dad play with powertools in the basement, until they come upstairs and find the two of you giggling uncontrollably after two hours of inhaling glue vapors. At this point, they will demand dinner and you and your mother will continue to titter, and attempt to engage in witty quips, like, “What’s for dinner? I dunno. You’re for dinner!” At this point, both partners will take the glue away and hide any unfinished angels. It brings new meaning to the phrase, ‘Angels we have heard on high.”

3. Pull out your glue gun and glue a bead onto the head of each angel. This is where the string will go through.

4. String fishing line through each bead and tie a good knot. If you still have E-6000 glue (and your partner hasn’t hid it on you), you can dab the knot with some glue to make it permanent.

5. Hang the angels off of a dowel, broom, or other stick-like thing. This isn’t strictly necessary, but it helps detangle the fishing line. 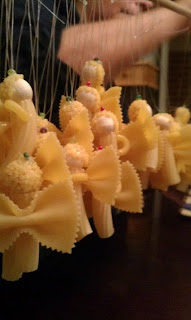 6. Dip each angel, one by one, into the enamel paint. You may need to take a paint brush and fill in little areas that somehow elude the paint. 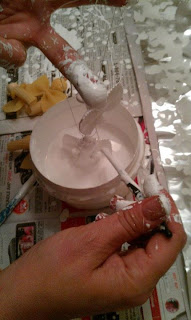 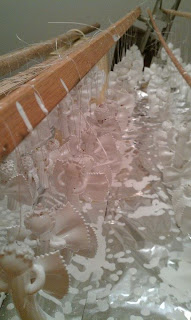 7. Hang each angel onto a dowel, broom handle, etc. Beware: the angels will require more ‘breathing room’ from each other than they did before. Let dry for at least a day.

By day two, Mom and I realized we were outnumbered by the angels, and recruited the others to help. How many A-type personalities does it take to paint 100 angels? The answer is four: one named Mom to dip and direct, one named Jordan to string the angels onto broom handles, and both to then harp at Dad to find more brooms, dowels, and sticks. Oh, and number four, my own sweetheart, to quietly help string up angels, wisely keeping his mouth shut as the other three nag each other about the ‘right’ way to do this. 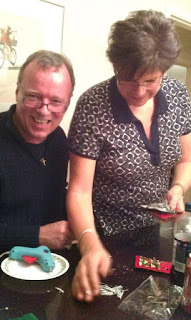 At one point, we realized we’d accidentally bought acrylic paint. Why is this bad? Because acrylic paint is water-based, and it made the pasta go soft, which meant that some of their stringing beads fell off. Along these lines of pasta storm troopers, we’d hear the occasional fwap as an angel fell several feet to the table top with a splatter. Dad started nagging that my bead idea hadn’t worked, and I said, “Whoa now, everyone! Out of  dozens of angels, only a couple have fallen. I think we need to look at the bright side here.” This caused me to break into hysterical giggles and point out the theological parallel: that another Creator had reportedly made angels and a few had fallen, and before this moment He was probably the last person to make the exact comment I’d just made. My parents, cool Christians indeed, had a good chuckle.

8. Inspect each angel, now dry (and no longer soggy, if you accidentally used acrylic paint), for any exposed pasta. Use a paint brush to fill in these little spots. 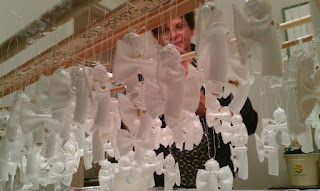 9. Grab your Sharpie and draw a little pair of eyes. If you look at our troops, every angel is a little different because no one could follow instructions; but I have more faith in you out there, so here they are: draw two smiles from two happy faces for eyes. Add some eyelashes if you feel like it. Now put the pen down.

We ended up having to paint over many of the angel’s faces and start again. There was just too much temptation for my own sweetheart, A.D.D. man that he is, to try out different faces. Somehow, whenever he veered from the prescribed eye-painting method, the angel would end up looking angry or unhappily surprised, like she’d sat on a tack. My dad couldn’t seem to get the knack, and my mother just kept painting the eyes the wrong way-up. I couldn’t believe it. The years have really mellowed my mom, who, twenty years earlier, made every angel meticulously identical. Her new que sera sera philosophy should have pleased me, but it turns out, I have inherited her perfectionist streak and so I found myself having minor heart palpitations as she handed over angel after angel with upturned eyes. 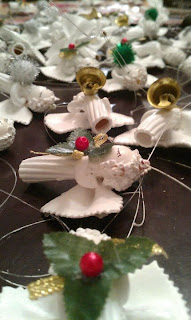 A bonus of mom’s relaxed crafting mood: she was totally on board with putting all sorts of nonsense in the angels’ hands. When Mom made these angels the first time ‘round, she painstakingly glued a piece of creased ribbon into each of the angel’s hands to function as a choir book. This year, Mom and I went to the dollarama and gathered all manner of tiny decoration. Technically, I think it detracted from the angels’ classy-ness, as I’ve always seen Mom’s angels as the pinnacle of Martha Stewart-worthy crafting. But it was more fun, and it was a nice splash of sparkle.

SUCCESS: A HOST OF ANGELS

In the end, we had one hundred perfect little angels. Do you remember that scene in Star Wars: Attack of the Clones when Obi-Wan Kenobi sees all the lines of identical storm troopers that those weird tall aliens have been manufacturing? Take a good look at the rows of angels. Yeah, there’s a parallel there. What I loved about this craft was doing it with my mom. I agree wholeheartedly with her that this is not a kid’s craft, so I completely understand why I couldn’t help out when I was little, though even then, it was fascinating to watch her work. But now, as an adult, learning one of my mother’s secrets arts, the experience had a feeling of deep importance. I have inherited my mother’s ability to MacGyver a pile of sequins, pipecleaners, pompoms, and toothpicks into an adorable chotchkie; and for this I’m eternally grateful. Mom’s ability to craft something out of nothing has always been an enviable brand of witchcraft that I hope I will one day master as she has done.

Next year, we’re going to make new crepe paper angel tree toppers. Mom’s is twenty years old and badly torn, and I don’t have a topper at all yet. This will require no toxic glue and we’ll only be making a couple, so I suspect it will be less of a gong show.

But I did enjoy the gong show. 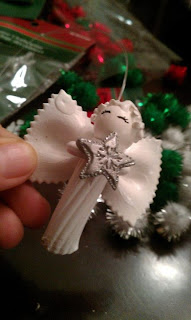 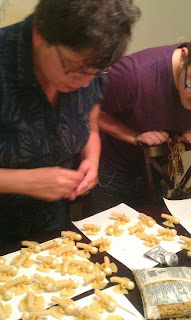 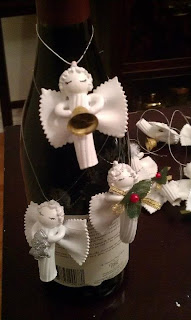 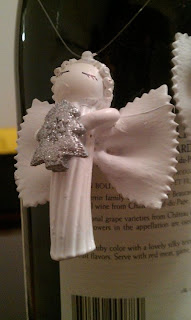 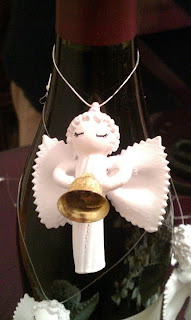