DIY: How to make a T-Rex Plush Toy from Scratch!


I’m live-blogging some of my Christmas crafting this year, so I’m going to have disclaimers: WARNING: if you spoil the surprise for a receiver of one of these gifts, bad Christmas karma WILL get you. Be sure of it. 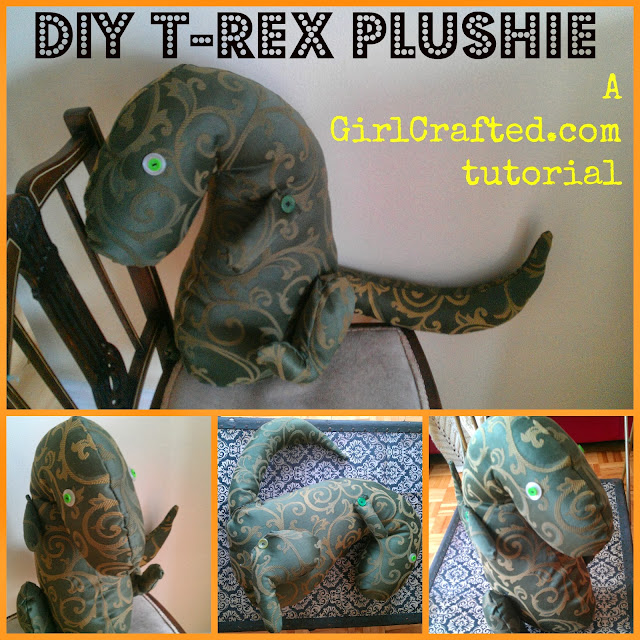 I WANT A T-REX FOR CHRISTMAS 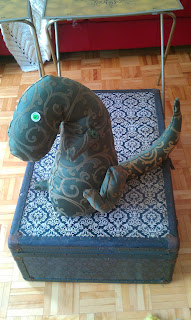 This Christmas, three year-old Blueberry made her one and only Christmas wish abundantly clear: she wants a dinosaur. I was thrilled, quite frankly, because it wasn’t something pink or over-the-top girly, so I was all on board with making this happen. Trouble is, it’s hard to find dinos for three year-olds that aren’t just the same ol’ plastic ones we’ve already got tons of. And plush can be prohibitively expensive. So I decided to make one.

But those who follow my blog know that I’m not really a ‘measure twice, cut once’ sorta girl; and I certainly never use a pattern. So this is the quick n’ dirty way to make a dinosaur plushie when you’ve never made one before. (Note: I’d call this an intermediate-to-advanced level craft, just ‘cuz it’s got a lot of steps.)

1. Fold fabric in half with ‘ugly side’ facing out. Chalk outline your dino shapes.
I made a sort of comma or kidney shape for the body/head. Remember to make your chalk outline at least a ½-inch wider all the way around than you really want your finished dino to be; this is because you’ll lose some size to the seam allowance.

2. I made leg shapes and arms shapes. (In the end, though, I found the arm shapes hard to use so I just made cylinders for the arms.)

3.a,b: Cut out your shapes. Make sure you’ve got ‘em all. Remember, you need two pieces for every shape (picture in your head that every body part is a little pillow).

4. Sew yours shapes shut with the ugly sides of both pieces facing outwards. Leave at least a 3 or 4-inch gap on each shape where you haven’t sewn it shut. I used a zigzag stitch to add strength. If you’re patient or a think-aheader, get thread that matches your fabric. I didn’t do that. My thread is black. I’m calling it a ‘rustic look’.

5.a,b: Take something like a meter stick and use it to finnagle each shape right-side out. This is a pain in the neck. You may need to use something more narrow like a ladle handle or paintbrush handle to push through some of the shapes.

6. Start stuffing your shapes. The more you stuff in there, the more solid and ‘stand-uppy’ your dino will be. I wanted mine really firm, so I used a TON of stuffing…about the equivalent of three throw cushions. It’s all about roughly stuffing the beast as full and hard as you can. (Stop yer snickering.)

8. Sew the buttons onto the dino’s head by hand. This is a bit tricky and you will likely have sore fingers. Sorry, but it’s the truth.

9.a,b: Sew shut your dino’s arms, then sew your dino’s arm into place by sewing it onto the body via a button. This adds strength (and styling) to your arm joint, and it inadvertently made mine posable.

10.a,b: Sew the legs shut where you left the gap for stuffing. (Unless you’re handy with the machine, you’ll likely do this by hand, as I did.) Repeat the button joint technique with the legs, but then you’ll also need to sew a few ‘anchoring’ stitches to help the hip stay in close to the body. Or skip the whole hip-leg shape and just do another couple cylinders for the legs. He doesn’t actually have to stand up, you know?

11. Note that I found the end of my tail shape to be too narrow to get the stuffing into, so I poured a cylinder of cheap seed beads down the tail first. If you do this, you need to REALLY stuff the stuffing down after it, or the beads will roll right through the whole tail. Honestly, mine still roll around but it still adds some weight to the end. Something larger might have worked better, like beans, but I wanted the dino to be at least a bit washable…no beans going mouldy.

12. Sewing the tail on was the last thing I did because it meant I’d no longer be able to stick my hand inside the dino’s body if I needed to fix anything. I first sewed the tail shape shut, then stuffed it into the gap I’d left in the dino (obviously at his butt area). I then hand-stitched the tail into place. Lots and lots of stitches, people; the child will likely carry this dino around by the tail, after all.

13. I added a second button to each eye by simply sewing it through the holes of the first one. 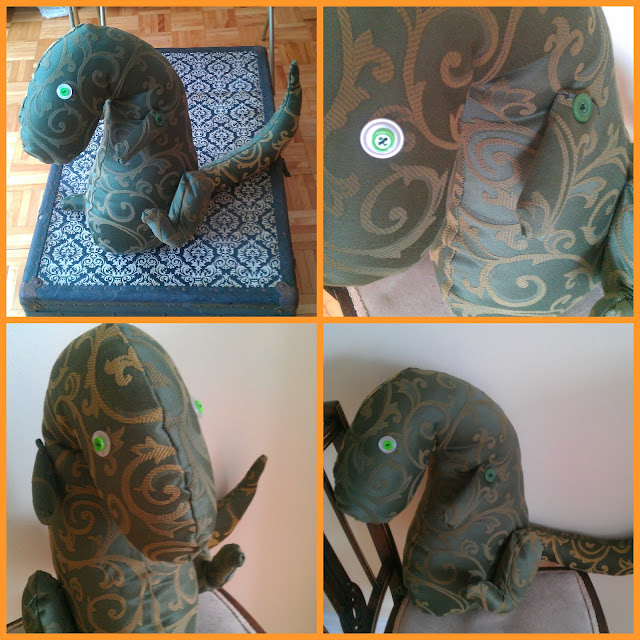 That’s about it! So, because I had the fabric on hand from another old project, I ended up spending about $8.00 in stuffing materials and that’s it. Well, that and four hours of time. But most importantly, the dino is made with huge love…a T-Rex by a T-Rex, as I am often dubbed because of my comically weak and useless arms. And we call Blueberry a T-Rex when she’s doing a good job on her dinner, so the T-Rex circle is complete. 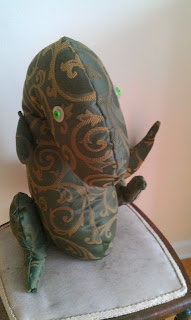 Double check all your stitches for strength, and be prepared to repair as the toy is loved to pieces.

FOR ADVANCED CRAFTERS:
-Try different animals out!
-Add a mouth, spikes down the spine, or other accessories.