First World Problems: Why that term is harmful

Let’s have a chat about the phrase, “First world problems”.

I hate the term. 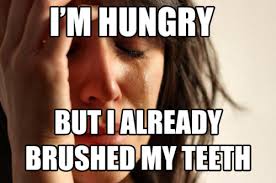 “First world problems” is a term that I learned a couple years ago, I suppose; it generally is accepted to mean, “The problems of privileged people from first world nations who are complaining about things that, when put into the perspective of third-world citizens’ issues, are insignificant.”

Examples:
“Mom and Dad will only pay for me to have a compact car after high school and I really wanted a sports car.”

“My Starbucks latte was totally made with the wrong syrup.”

“I’m stressed out because I can’t afford that limited edition Batman lamp with Bruce Timm signature!”

Okay, so I get it: people whine about a lot of things that are actually pretty irrelevant in the grand scheme of life. But this term really drives me nuts, and I dislike how people bandy it about, using it to shut people up when they’re talking about their problems. It occurred to me recently, when my boyfriend (of all people) used the term to shut me up, that this could be a simple matter of perspective and knowledge. Let’s look at something together:

This is Maslow’s hierarchy of needs. In a nutshell, the psychologist Abraham Maslow proposed a hierarchy of needs back in 1943. It basically said that, as a person’s basic needs are met, s/he will move on to different types of needs and concerns. For instance, once Joey’s need for food and shelter is met, he’s going to find himself seeking companionship…then something to do with his time where he’ll excel…then maybe he’ll take up a hobby...then maybe he'll start becoming involved in local politics or volunteering.

Generally speaking, this is the basis of why we have counsellors for unhappy people. When I worked at a drop-in centre for homeless teens, I spent a lot of time meeting the most basic of needs—food, water, sleep—for kids who were at their lowest point. But it wasn’t long before those same kids, now warm and fed and rested, were heard whining about needing a cel phone. Is this because they’re suffering from “first world problems” syndrome? Or is it perhaps because the next tier on Maslow’s scale shows that family is important—and that a cel phone may be the way that a homeless kid stranded in Ottawa talks to his aunt out in Halifax? 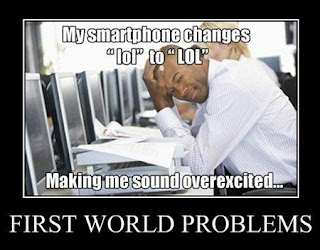 You can use Maslow’s pyramid to determine the wellbeing and functioning of an entire culture. Why do we have agriculture? Because people were warm and well fed, and had familial groups to support them, while they dreamt up new ideas like plows and seed storage. Because our ancestors had the luxury of worrying about “first world problems”, you are now sitting in a chair, enjoying a wheat beer and eating a sandwich. If everyone who worried about “first world problems” was told to button their lip, we’d be awfully short on MRI machines, power plants, polio vaccines, and airplanes.

You can measure a culture’s wellbeing by the number of its citizens who have the time to worry about “first world problems”. The more people whose major concerns in a day are high up the scale, the higher the likelihood that that culture is a developed nation. You'll also notice that it's only at the upper rungs of the pyramid that a person starts to worry about morality and ethics--meaning that, if we didn't get to a level of wellbeing and security that makes us "first worlders", we probably wouldn't have the mindshare to worry about the other, less fortunate people on earth.

WHAT YOU MIGHT ACTUALLY MEAN WHEN YOU SAY ‘FIRST WORLD PROBLEM’

What I think people might actually mean when they’re condemning people for having “first world problems” is that they’re being selfish, and the assumption is that the complainer doesn’t have any thought for his fellow humans who don’t even have, say, a cel phone to accidentally drop in the toilet and then mourn for. I suppose that’s true, but I can imagine that even Bono occasionally gets annoyed that his socks get eaten by the dryer; I bet Bill Gates occasionally returns a macchiato for being too sweet. And both these men together have done more for their fellow humans than most of us could ever do in our lifetimes. Combined.
I find the “first world problem” phrase to be terminally negative. It implies that you’re somehow sinful for having concerns above the bottom rung of Maslow’s pyramid. If I live in Bangladesh and I’m worried about getting a job after the collapse of my Joe Fresh sweatshop, does that make me a whiner compared to the man in Angola who’s worried about finding food? Of course it doesn’t.

Human problems are nuanced, highly subjective, and cannot be judged by the outsider. Otherwise, when I’d been a practicing counsellor, I would have only been working on food and shelter concerns, not listening to hours of people agonizing over choosing a religion, passing college exams, leaving bad boyfriends, and hearing voices. Never, in the course of a session, did I stop the person in distress, put up a hand, and say, “Wow, that sure sounds like some first world problems.”

WHAT ARE YOU REALLY TRYING TO SAY?


I think what people really are trying to say is, “Be grateful”. And I’m totally cool with that message. When I’m complaining that I lost my job and don’t know what’ll happen next, I do eventually calm down and remember that I’m grateful to live in a country where I can cohabitate with a male roommate to help pay the mortgage, and that our country offers employment insurance. Again, though, it’ll be about how you present it: if I was talking with a person in similar distress, I think I would offer a hug, sympathize with the crisis, and say simply, “Remember your gratitudes. They’ll keep you grounded.”

I’m suggesting we all stop damning each other for having “first world problems”, and instead let’s work on supporting each other—wherever we live, and whatever we worry about.