Recently, Capital Geek Girls (our pet project here, the fanclub for geeky girls) was featured in Geek Inked Magazine.  But it gets even cooler. 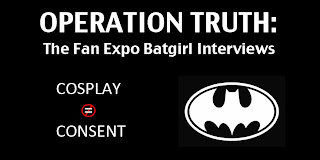 Resident roving reporter "Rob" was inspired by our chat, and wrote a killer article called "Operation Truth", where he interviewed about a hundred different people (of all genders) about their experiences with and around sexual harassment and sexism at geeky conventions. He was in attendance at FanExpo in Toronto, and did his research there. Rob's article is fantastic, interesting, and makes me feel like the word of the Capital Geek Girls has been spread a little further with this great continuation and evolution of the geek girl movement. Hurray for cool geeky boys who support geeky girls!

Enjoy the article. Seriously, it's a good read.