Last night I was one of the bloggers selected to read at Blog Out Loud Ottawa 2014, which was part of the Ottawa Writer's Festival this year. I didn't know before getting there that I was one of a handful selected out of about 60 applicants. I can tell you, that raised the stress level a bit...but was obviously a huge honor.

I wanted to write a quick post and say thank you so much to Lynn, who organizes this event every year. This is my second time being selected, and it is such a unique and special opportunity as a blogger, to witness an audience hearing your writing. Blogging can be crazy-making, because you hear back from so few of the readers, and you have absolutely no way of knowing what they thought. It's not like books, where I can measure the enjoyment of my readers by the number of copies sold. So to have that time where a room of a hundred people laughs at all the right spots, and sighs at all the right spots...it's a kind of a magic. 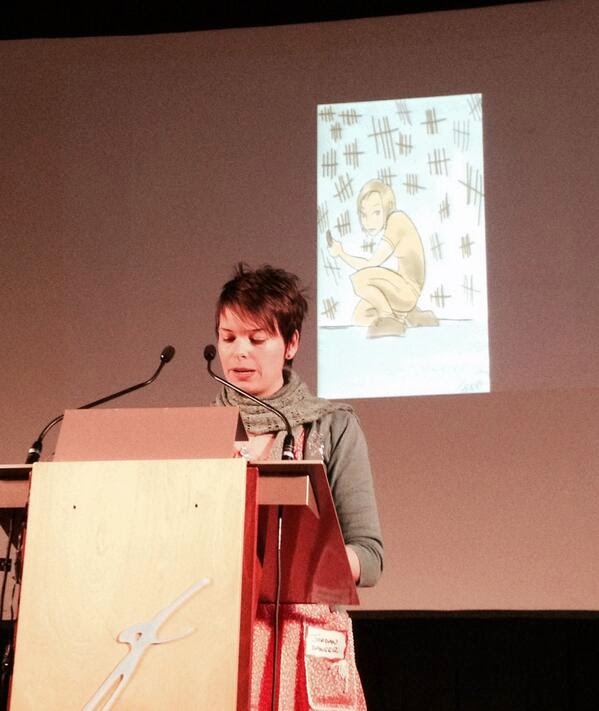 To those that stayed to talk to me, thank you so incredibly much for doing so. The post the jury selected for me to read was The Four Horsemen of the Mental Health Apocalypse. It's a very personal post, and a very dark one--though written with my usual irreverence, of course. I was nervous to share it like that, and as we got closer to the date I was less certain it would resonate with people in the flesh; but apparently it did, because you were so generous and effusive with your praise.

Thank you for coming up to talk to me, and sharing some of your stories about mental health. For the aspiring blogger I met, who told me, "You said everything I wish I could say about depression": thank you. For all the others, thank you too. I came to share a gift of a story with you, and instead I feel like I left with far more in return than I can ever express.

Corben thanks you all, as well. He handled the echoes, the chamber music, and the rounds of applause like a champ. Attached to that is a special thank you to Lynn from Dogs In Harmony who has helped my 8 month old furball become a polite young man.

And a deep, heartfelt thank you to my friends who came out. Though I was far across the room standing alone on that stage, it was directly to you guys that I was reading.

And lastly, a thank you to the combat veterans who inspired the Four Horsemen post. In learning about service animals and working with Corben, I have had the distinct honor of getting to meet some of you, and seeing you at your most courageous--not when you're fighting battles with guns against enemies, but when you're fighting battles with nothing but your strength, against inner demons. It was for you that I wrote the post.

Alright, that's enough mushy stuff. As you were.