Monsters in Suburbia: adventures with rodents

Last week at bedtime, I heard a scrabbling sound in the garden. I checked out the bedroom window and couldn’t see anything in the dark, but I was quite certain it was going to be a raccoon or a skunk in our garbage bins. I could just make out some movement, and saw a dark little head poke into a bin before dragging something out to eat. 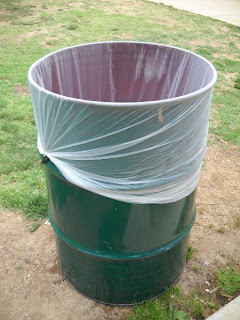 I tried shouting at the thing, “Get out of my yard! Get out of there now!”, but the creature just kept chewing away. Poor Alan was laid up in bed with a back spasm after an unfortunate roller skating incident, so I had to take matters into my own hand. I ran downstairs, ignoring Alan’s pleas for rational thought. I threw open the back door and continued shouting at the beast, but to no avail.

Then I realized that the neighbours, who couldn’t see what I was doing but could definitely hear me, must think I was yelling at a person—real or imaginary—because who would be yelling full sentences at a raccoon? So I stopped, got a pan and a big spoon, and came back to bang the things together. Of course, this failed to scare off the animal, who was a hunchbacked silhouette noshing away at the far end of the yard. So I ended up shouting obscenities at the same time, and I’m sure this has done nothing to score me ‘non-crazy’ points with the neighbours.

Anyway, it was about this time that I got a better look at the animal, and with growing horror I realized it was a giant, fat, spiky nasty porcupine. A huge one. I slammed the door shut and yelled up to Alan, more just for his information than anything. I heard him stagger out of bed, but I was already running to the kitchen. I needed something to throw at the monster. I think I was running on autopilot, after years of having a dog: a porcupine in the back yard would mean suffering for Mr Darcy. I grabbed a can of soup and managed to hit the garbage can with a loud bang, but the porcupine just looked up at me, raised an eyebrow, and went back to his snack.
By now Alan was beside me, trying to reason with me. In my heightened state of adrenaline madness, he just appeared to be trying to stop me from defending my nest. I brushed past him and got a mini can of tomato paste, then shouldered my way past him as he attempted to block me in the kitchen. This can landed near the beast, and he seemed to take the hint and left under the fence. Later when I asked him why he was trying to stop me, he said he’d been worried I’d hurt the porcupine. I just stared at him, mouth open; there was a spiked monster in the backyard and he was worried I would hurt it?

When I later relayed this story to my roommate, Bruce reminded me that I’d been desperately trying to convince him we should foster a baby porcupine named Charlotte from the local animal sanctuary. I felt bad then, thinking that this may actually be my cute little Charlotte.

Well, I felt bad for about half a day, until I went out to check on my zucchini plant and found that something with a large mouth had eaten half of both my sure-to-be-prize-winning zucchinis. I’m not joking; these were huge. I was furious.
A couple days later I stuck my head out the window again to spy a big grey squirrel perched in the middle of my zucchini plant, eating the last of the three zukes I’d managed to grow this year. Both Blueberry and I shouted at the thing until it ran out of the plant, into the garden, and stole my last red cherry tomato. It ate this on the fence until Blueberry and Alan went outside to scare it away, ostensibly to stop my tirade of shouts and curses that were again disturbing the neighbours. Also I'm not sure how I feel about having taught a little girl to shout at animals in public.

The next morning I was sitting on my front step when a mangy one-eared black squirrel walked up the path and tried to sit on me. Turns out, this is not as cute and wondrous as it looks in the Disney movies. I screamed bloody murder and it ran away. A few minutes later, Bruce emerged from his room bleary-eyed and wondering what the hell the screaming was about. When I told him he just gave me a long-suffering stare and walked away.

I don’t know if I realized what I’d signed up for when I transitioned from urban life to suburban.