You’ve probably seen them around, if you’ve hit any of the local craft shows this season: Totally Squared has been making their presence known in person and on social media for the last many months. Given my recent dairy fast, I had to wait a while before trying their treats, but Vanessa, owner and baker from Totally Squared, supplied me with a giant variety pack to try. And that was a sure-fire way to win me over for life. 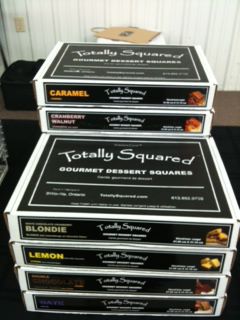 Totally Squared makes nothin’ but good old fashioned dessert squares—a wondrous change from the overpopulation of cupcakeries in the Ottawa baked goods market. I have a special spot in my heart for church bazaar-style squares, likely from the inordinate number of funerals I’ve been to (remarriages of my grandparents meant that I’ve had eight of them instead of the usual four); this may sound morbid but funerals have always been a happy memory for me, like family reunions and a dark sense of humour unique to a gathering of Irish Catholics. Pinwheel creamcheese sandwiches and dessert squares are some of my favourite things.

In the variety pack provided by Vanessa, we got to try:

Lemon: a curd-like topping on a shortbread crust
Double Chocolate Caramel: a chocolate chip cookie base, caramel centre and chocolate ganache on top
Raspberry Coconut: a biscuit-like base (more cakey than shortbread-y) with a raspberry filling, and coconut butter-tarty goodness on top


Cranberry Walnut: shortbread base, buttertart-like filling studded with walnuts and tart cranberries
White Chocolate Cranberry Blondie: all the chewiness of a brownie with white chocolate, dried cranberries and a hit of lemon
Traditional Brownie w/ Chocolate Topping: no more to say, except this is more of a cakey brownie
Butter Tart: a classic made into a square
Rocky Road: graham crumb base layered with almonds, coconut chocoate and marshmallow
Magic: a ginger cookies crumb base layered with peanuts, chocolate and coconut
Red Velvet Cheesecake Swirl Brownie: it's brownie, red velvety cheesecakey goodness all in one....
Peanut Butter Nanaimo: our base has almonds....plus this is a classic for the peanut butter and chocolate lover. We use a ganache topping to cut the richness of this square.
Caramel: gooey caramel on a shortbread base.

Totally Squared does a twist on some of the traditional flavours—for instance, their lemon bar is about 1/3 lemon curd, the rest being crust and sometimes a white chocolate topping. For traditionalists like my dad, this was a bit of a letdown, but it was tasty in its own right. I enlisted four helpers for tasting, as this was a lot of sugar to consume and I’m always up for second opinions, and consequently, we had some consensus as well as some disagreement. Generally it was agreed that we wished the crusts were thinner on some of the gooey-middled squares, like the butter tart square; mind you, if you’re a crust lover, Totally Squared’s crust textures are fantastic.

The winner for all-round favourite was the caramel. The flavours were sweet and buttery, and the thicker crust was helpful in reducing how overpoweringly sweet a caramel like this can be. While we felt that in general, the flavours in most of the squares could have used more POW!, I couldn’t put down the Rocky Road and the classic brownie just called for ice cream.

Totally Squared just got themselves an industrial kitchen, so be prepared to see them spreading far and wide. If you’re looking for something that tastes homemade—just a good ol’ dessert square, like Mom used to make (and then served at your grandpa’s funeral)—you’ve come to the right place!