So I’m dating a man.

I wasn’t going to necessarily announce it just yet. I have been enjoying the quiet, I suppose; the absence of prying questions and teasing and speculation. All that all came to an end yesterday, however, with a rather resounding bang. But I’ll get to that in a second.

I have known Alan for over a decade. We are old friends, and I have always loved and esteemed this man. I told my mother we were dating and asked her what she thought; she said,

“You know those romance movies where two people love each other but something happens and they marry other people, and then one day their spouses die on the same day and they reunite at the funeral, and then they get together and the audience says, “Finally!”? That’s you two.”

I  have no idea what twisted romance movie she's been watching, but I took that as a vote in favour. 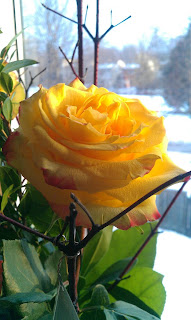 OF ROSES AND COINCIDENCES

How’s it going so far? How can I best answer that question so you’ll understand just how shiningly happy I’m feeling…here, let me share yesterday’s story with you.

Yesterday I decided to visit Alan on my lunch. He works not far from my own day job, so I’ll often make the trek down to say hello and grab a sandwich nearby. I had decided that today, I would stop along the way and buy him a flower. We haven’t given each other flowers yet, so I felt this was an important moment: what kind of flower would I get him? Did I go with a massive bunch, or something simple and sweet? I stood in front of the choices for fifteen minutes, debating. I knew that his favourite flower was a rose, but I didn’t want to give him something so predictable the very first time. I spied some incredible lilies, but those are my favourite, not his. I opted instead for a giant white spider chrysanthemum, because they’re incredible to look at. One single, perfect bloom, one brief handwritten note, and I was off.

I met up with Alan and gave him his flower, which seemed to astound him more than really made sense. But we continued with lunch, and he walked me back to work. I said my goodbyes, and headed back up to my office. 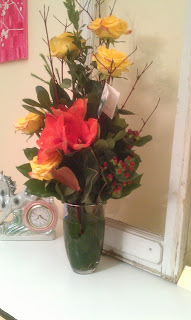 As I stepped in the door, my jaw dropped and I stopped dead. There, on my desk, was the biggest, brightest, most lovely bouquet of flowers I had ever seen. I have received flowers in the past, but nothing—nothing—has come close to this in terms of grandeur or elegance. I found myself struggling for words, asking my supervisor who had brought these? She smiled and said she didn’t know—check the card! For a brief moment, I thought perhaps my boss had got them for me (the day before was Community Manager Appreciation Day) but he came out of his office and demanded to know where they’d come from, too. My shaking hands fought with the envelope and finally I managed to read the name signed at the bottom. Alan.

Teasing and prodding continued as I struggled to regain my composure. I dodged the questions and good-natured ribbing, but there was no real way out of it. I muttered that I was seeing someone.

Just then, a big boss lady from another department came in the door. She has a very commanding presence, and a no-nonsense attitude. Like Dame Judy Dench. Boss Lady Dench saw the flowers and asked what they were for; my boss said I had a suitor. She looked the bouquet up and down, and then said,

“Well, he clearly has exquisite taste. What does he do?”

I told her. (This gave away who my sweetheart was, much to the mirth of my boss man.)

“Where are the flowers from?”

“Well, he’s got great taste and he’s doing well for himself,” she said, and left.

I loved that Alan and I got flowers for each other for the first time, on the same day. I loved that his were a mix of roses and lilies…just as I had been considering. I loved that I had shown up with a flower for him at the same moment his must have been delivered to my desk. And what I loved most of all was that I discovered Alan had actually planned to get me flowers the Thursday before, but he’d run out of time.

Why did I love that? Because last Thursday, I’d also tried to get him flowers, and had also run out of time. The exact same day, we’d had the exact same idea. Twice.

I guess the word of the day was synchronicity.