How Not To Talk To A Service Dog Team 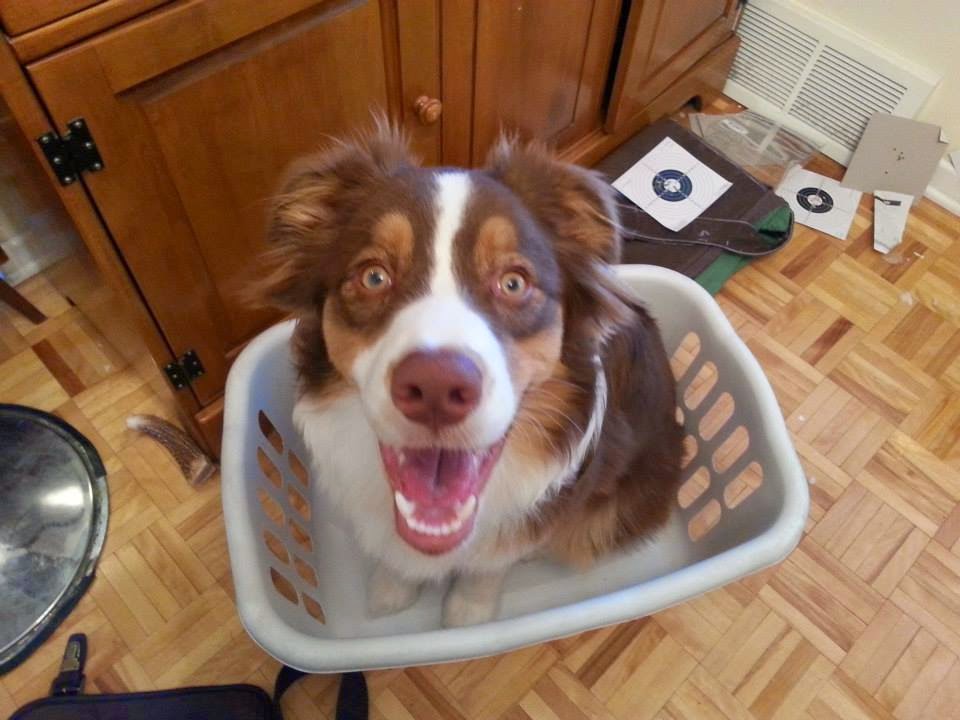 Some of you diehard readers know that I am in the middle ofthe lengthy yet rewarding process of training my own service dog. Corben is a bit of a social media celebrity—or at least I think so, as I post pictures of him regularly. He is 11 months old now, and acing his training. He’s with me most of the time now, and he’s helping me a lot with my daily life. And he’s ridiculously cute, so he’s kind of like a visual form of Prozac. Win-win, right?

Well, most of the time.

I’ve discovered that when you appear able-bodied and have a service dog with you, you’re going to experience a lot of bizarre behaviour from strangers. I think we can use these examples as a ‘How not to talk to a service dog team’ sort of list. Here it goes.

HOW NOT TO TALK TO A SERVICE DOG TEAM

1. DON’T HOLD THEM UP.
Yes, I have a service dog. Yes, he’s interesting. No, I don’t always have time to talk to you about him. Last week Corben and I got onto an elevator that a man had just vacated. As the door was closing, I saw this man turn on his heel and shove his hand into the door to keep it open. As the emergency system kicked in and the door slid open, he stared at us and said, “Is that a service dog?” Yes, I said. “Well…can you explain that to me?” I’m late, I said. “Oh. Oh! Okay…” said the man, and finally let the door shut. Yes, this really happened. Yes, I’m unimpressed.

2. DON’T ASK WHAT’S WRONG WITH THE HANDLER.
Don't get me wrong, I love talking about dogs and my dog in particular. But if I had a dollar for every time someone asked me, “He’s your dog? What’s he for?” I’d have enough money to never worry about the cost of Corben’s training ever again. The problem with this question is that you are basically asking me, a stranger, to tell you what my disability is. Sometimes I even get this question from acquaintances or friends I don’t see often. Most frequently, I’m asked this in a crowded room with lots of eager ears around. No, I don’t want to explain to anyone what’s wrong with me.
3. DON’T KEEP ASKING WHAT’S WRONG WITH THE HANDLER.
Okay, we all slip up sometimes. It’s possible not to realize that a) you’re asking someone to divulge their personal health challenge, and b) that that’s incredibly rude. But if the conversation goes like this:
STRANGER: What’s the dog for?
ME: Service.
STRANGER: What kind of service?
ME: Medical alert.
STRANGER: What’s that mean?
ME: It means he helps me by alerting me.
STRANGER: Okayyyy, but what’s the problem with you that he’s watching for?
…you’ve pushed too far. “Medical alert” means, “I have a medical problem.” Look at it this way: if I came up to you on the street, stood in front of you, and said, “I have a medical problem.”—without Corben beside me, just for no good reason, wouldn’t you think I was being socially awkward? Wouldn’t that seem like an over-share? The presence of a service dog does not mean you should feel all rules of polite conduct are moot.

3. DON’T ASSUME THE ABLE-BODIED HANDLER IS A TRAINER.
It’s easy for me to hide sometimes behind the assumption that I’m just a dog trainer. Honestly, many of us with service dogs do let this assumption ride in some awkward situations. But in some ways, it diminishes what Corben and I are to each other. It also daily reminds me that I look healthy, so the fact that I’m daily struggling with a serious medical problem is invisible and therefor, not acknowledged. Anyone who’ suffered through a non-visible health problem can relate to this. It’s like visiting your aunt and having her repeatedly offer you ice cream even though she knows you’re lactose intolerant but just never remembers. In a way, the refusal of people to consider I may have a disability makes me feel even more invisible. 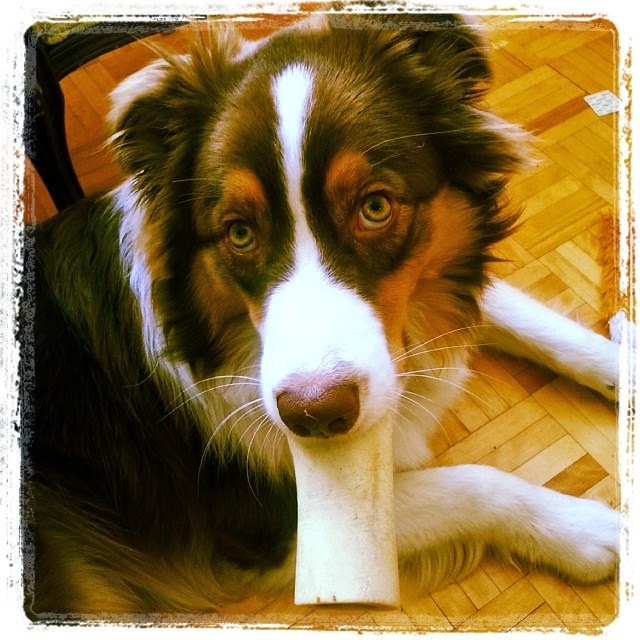 No, you can’t pet him. See how small his brain cavity is? The smartest dogs in the world have only the reasoning capacity of a 12 year-old. If I came to your 12 year-old’s math class and started petting her while she was doing an exam, don’t you think she’d make more mistakes than usual? Every time we’re out together, Corben is performing his own version of a math exam. Every time you try to pet him, you mess up his concentration. Yes, it’s cute when he breaks stride and wriggles to be patted. No, you’re not giving him a pleasant break in his day. You are essentially giving pixie sticks to that aforementioned 12 year-old and then leaving me to get him focused back on his math test.

5. DON’T POINT HIM OUT TO YOUR TODDLERS.
If you petting him is like a pixie stick, a toddler barking at my dog—yes, they bark at him—is you giving Corben a litre of Red Bull. All concentration is lost, and any work I need him doing isn’t going to happen. I don’t run up and pet your toddlers; please keep your kids off of my toddler.

6. DON’T FORGET TO EDUCATE YOUR STAFF.
Ottawa is pretty good about not giving us a hard time. However, I went out for dinner with a friend a couple weeks ago, and a young waiter informed us that dogs weren’t allowed in the restaurant. After I pointed out his vest and told him we had our papers in my bag, he put his hands on his hips, cocked his head and said, “Yeah right. What’s wrong with you that you need a dog?” I don’t have to explain this and I’m not going to. Shop owners, be sure that even your youngest staff understand that it’s a human rights violation to kick me out of a store for having a dog, and it’s also wrong to demand to know what my health problem is. 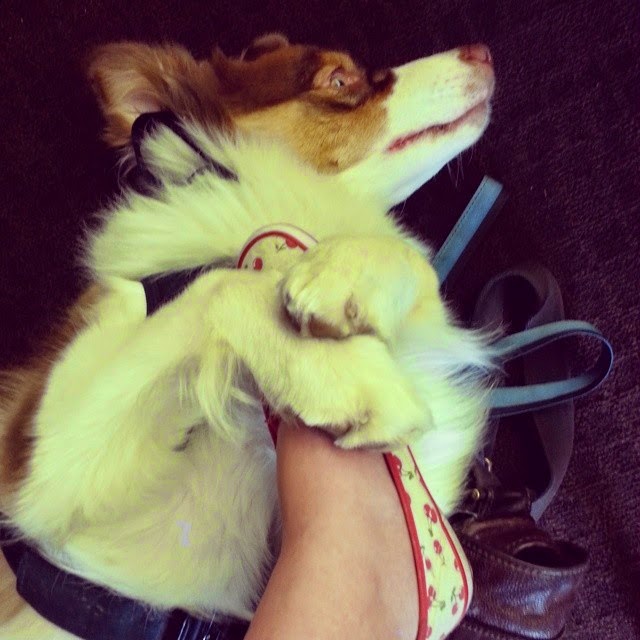 7. DON’T EVER ASSUME WE’RE FAKING IT.
At Ottawa Comiccon this year, I managed to attend 2 out of 3 days. This is in huge crowds with poor air circulation and a lot of noise. I was able to do this because I had Corben. At one point while I was looking at a vendor table, my friend heard a man mutter something about, “strapping a vest on his dog, too, just to bring him to the con”. MJ rocks, so she turned to him and said, “Yeah, maybe that would be fun, except this is a real service dog.” You’ll occasionally hear horror stories of people faking service dogs, but I haven’t seen it happen around here, and when you look at Corben’s behaviour, you’d have to be an idiot not to see just how heavily trained he is.

8. DON’T CALL IT A PRIVILEGE.
After I answer all the questions people throw at me about my dog, their curiosity sated, I will often get a comment like, “Well how nice for you that you get to take your dog everywhere! Well I sure wish I could take my dog with me everywhere!” Listen to what you’re saying, people. You’re telling me I’m privileged because I have a disability where my best tool for normal daily living is having to raise, train, and cart a dog around with me everywhere I go. Yes, he’s cute and fuzzy. No, in many ways he does not make life easier. When I leave the house, I have to be aware of all his needs plus my own. I have to look for ways to traverse a mall without the use of an escalator. I have to choose seating in restaurants based on where my dog’s fat butt won’t get tripped on. I have to get special dispensation to take him on a plane. But yes, he is lovely and he does make my days a hundred times better. So I think it’s bogus to suggest that having a service dog is a lucky privilege; I think it’s more of a karmic balancing. I have to live with this shitty disability for the rest of my life, but the trade-off is that I get to have a sweet-faced companion come along with me. 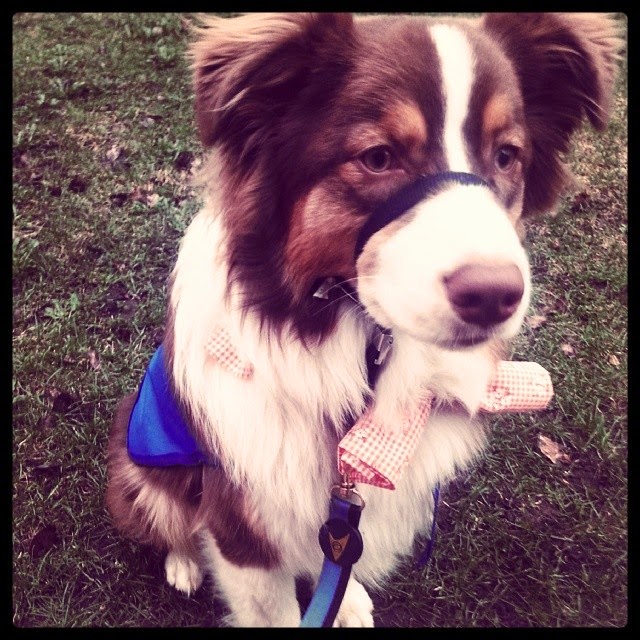 9. DON’T ASSUME THE DOG IS A SIGN OF WEAKNESS.
I had a job interview this spring. I got to the second round before I mentioned Corben, who I’d purposely left at home for the first round. When I mentioned him, the interviewer started asking if I was really sure I could do the job, if (and I paraphrase here) I was so effed up that I needed a service dog. I pointed to my resume and said, “Everything you see on here that you like, I did with my disability present. The dog doesn’t make me less capable. He makes me more capable. I accomplished much of these things without him; imagine how much more I’ll do now that he’s with me.” She didn’t bite. She couldn’t shake her bias. The reality is, having a service dog means that people are daily reminded of my otherwise invisible disability. But instead of looking at Corben as a reminder of how I’m broken, try looking at him as a reminder of how I’ve soldered myself back together. He’s not a weakness; he’s a weapon against failure.


It’s a dog, folks. You see dozens everyday walking around your neighbourhood. I don’t get what all the fuss is about. When you put all the attention on my dog, you make me feel like all the qualities I possess as a person are secondary…that my companion is all that defines me. Just relax and ignore him. It’s what he wants, anyway. Stop staring at the dog and get back to making eye contact with me. I’m here and better than ever.