Yoga Pants and A Lost Puppy 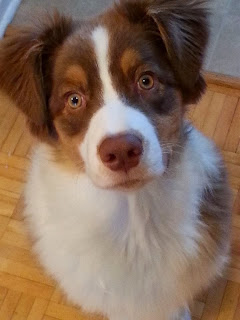 This morning the puppy got out of the house. I was cutting up herbs to put into some new jars when I
suddenly felt a wintry breeze on the back of my legs; I looked around the corner to find that the front door, which hasn’t been closing properly, had blown open. Naturally, Corben was nowhere to be found.

Pure, unadulterated panic overtook me. I ran outside, slipping around in my furry slippers, calling hysterically for him. I dragged myself through the snowbanks to check fearfully in the road, where I was convinced I’d find his twisted, broken body. I veered around the side of the house, calling and clapping my hands. And that’s when Corben poked his head up over a mound of snow: he’d headed straight to the park where he loves to chase his laser pointer after the sun goes down. He ran right to me when I called again, and I picked him up—all forty wiggling pounds of him—and went inside, where we both sat on the floor, shaken by the entire ordeal.

Here’s why I’m telling you this story. 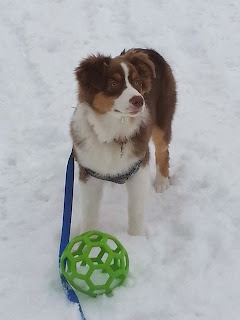 When I realized Corben was gone and made my mad dash around the neighbourhood, I hadn’t yet dressed for the day. On Friday night I’d gone shopping for some PJ’s, which is something I don’t usually do: it always feels like a waste of money to buy a prescribed tee-shirt and jogging pants for bedtime when I have old worn-out gym clothes that work just as well. But I’ve been needing a pick-me-up, so I headed to the new Victoria’s Secret to see what I could find.

To my own amazement, I ended up falling in love with a pair of black yoga pants, sporting a set of bedazzled rhinestone angel wings across the buttocks. I tried them on because I really like wings, and I needed a pair of pants, and they were dirt cheap on sale. I bought them because when I put them on and they felt like the fabric equivalent of a warm hug, I knew I had to have them. Yeah, I think yoga pants should only be worn for yoga; and yeah, I think having anything emblazoned on your rear-end is one of the most tawdry things a girl can do to herself…but every now and then, just for a brief moment, I find myself desirous of something utterly girly. And since no one would ever see me in them outside of my own family, I figured, why not. I topped off the ensemble with a super-cheap hoodie with the words “I LOVE PINK” written in glitter across both the front and the back. Because again, I would only wear it for bedtime and the people in my house know I don’t love pink. But I do, secretly, adore sparkly things. 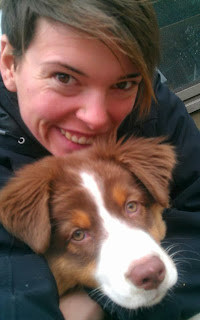 Anyway, it was in this ensemble that I ran, with the addition of furry slippers, looking for my dog. After the adrenaline left my system and I was no longer shaking with fear, I realized that I’d given the entire cul de sac quite a little show, decked out in my sparkly Victoria’s Secret gear, bellowing and clapping and stumbling through the snow.

So then I thought of all the times I’ve wrinkled my nose when I see people on TV, talking to the news reporters at the scene of some accident or crime. These people so often seem to be wearing embarrassing sweats, crude slogan tee-shirts, and never ever a bra. I thought about all the times I would think, “What horrendous trashy neighbourhoods do these people live in? How come these newsworthy stories always seem to happen where these horrendously trashy people live?” And now I wonder, if maybe just maybe, some of those poor folk were just like me: it was their one day in months where they slept in; their first time in years not getting changed first thing in the morning; and they had just bought those ridiculous pants with the word ‘juicy’ across the ass on sale that weekend because they’re just so comfortable. And maybe when they looked back on the newsclip, they too had a moment of redfaced chagrin as they realized what they were wearing. 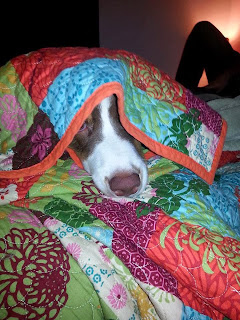