Soon I'll be doing a full wrap-up post about Ottawa Comiccon 2013, but for right now, I just gotta show you something:

That's Julie Newmar with a ball of twine, people.

Yes, the original (and finest) Catwoman is holding a ball of twine.

If you don't know why Ms Newmar has twine, you may not be a reader of The Bloggess, and you may have missed my earlier post about going to Comiccon armed with twine for a photo with Wil Wheaton. But long story short: Jenny Lawson, blogger of the Bloggess, has a growing collection of celebrities doing mundane things like holding balls of twine. And because I adore the Bloggess, I set out to hit the Con and try to get her one specific ungettable shot: Nathan Fillion with a ball of twine. Which I kinda did, too: so here you go, Jenny: it's the best I could do:

Nathan Fillion with a ball of twine. Sorta.

My other goal had been to get Wil Wheaton to do a twine photo with me, but first *I* was too busy, then *he* was too busy, and basically when you try to get an overstimulated, attention-deficit blogger to remember that she's gotta stop playing with nerd stuff and go track down Wil Wheaton, you may end up with the blogger forgetting to do that. We just got so busy interviewing costumed fans (video to come) that I kinda forgot about Wil. Sorry, Wil. I came back on Sunday specifically just to see if I could grab him for an interview, but the PR team politely told me to frack off, because I should've asked yesterday. So I was just about to wander off and go sulk somewhere when I noticed that Julie Newmar had a lull, and there was no at her autograph booth.

I ran back to my bestie MJ, who was working at a booth, and grabbed her by the arms. "Julie Newmar is taking photos and there's no line," I said. MJ's eyes grew giant and she said, "Are we really doing this?!" In response, I clutched her elbow and began dragging her, full-speed, through the crowds.

A little context here: MJ and I are big admirers of classic film and television actresses. And when it comes to elegance and beauty, Ms Newmar is top rank. And, aside from being one of the original Catwoman actresses, she was also in To Wong Foo: Thanks For Everything, Julie Newmar.A movie we both love and MJ has always wanted an autograph just like that. So yeah: we ran.

We ran up the rows of railing and stood behind another girl who’d gone up to meet Ms Newmar. While we waited, I could see how overwhelmed MJ was, and with giant eyes she murmured that she’d maybe like an autograph. Then it was our turn, and I basically had to drag MJ forward by the elbow, she was so frozen.

The wonderful, blessed thing about other people panicking is that it makes me less panicky. So, despite my own tendency to be struck dumb by the presence of celebrity, I kept it together for the sake of MJ. And she did great. She told Julie Newmar how lovely she thinks she is, and how much she admires her. I definitely mumbled something along the same lines. The two of us, though, did spend a lot of time just staring at Ms Newmar while Ms Newmar stared expectantly back at us. Then she looked at my hands, where I had my giant ball of twine clutched in front of me, reached out one long catlike finger to tap it, and said, “What’s this?”

And basically what came out of my mouth was a classic Jordan string of words said so fast, they sound like one long blur: “It’s-a-ball-of-twine, you-see, my-friend-has-a-blog [‘friend’ being Jenny Lawson, of course, and ‘friend’ being ‘someone I hope I meet one day and don’t throw up on’], and-she-has-this-crazy-collection-of-photos, you know, of-celebrities-with-balls-of-twine-and-other-stuff.” Ms Newmar just stared at me, perhaps wondering if I was mentally well, and I felt something more needed to be said, so I added, “She’s friends with Wil Wheaton.” Because that obviously was proof that none of us over on this side of the autograph table are insane.

Anyway, she said, “Well, that’s the most peculiar thing I’ve ever heard,” and then we asked for a photo with her, and she said yes, and then I asked if she’d consider holding the twine, and she said yes, and then they took the photo and now I’ve got a photo with my best friend, Julie Newmar, and a ball of twine symbolic of the funniest living woman writer I know. So it’s like four levels of girl power awesomeness.

Oh yeah: and MJ managed to turn the twine thing to her advantage, because after the photo she asked for an autograph but said she wanted something specific, and that it may sound like a strange request, but would she sign like she did in To Wong Foo? And of course, after the ball of twine, this seemed totally normal. So she did it. 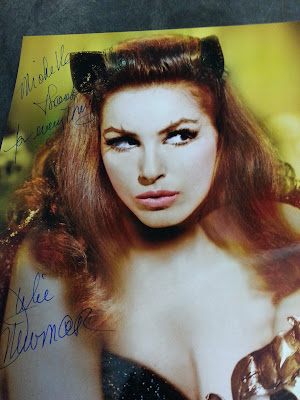 I was so happy. I had set out to get a really cool celebrity shot with a ball of twine; and MJ had been dreaming about a ‘thanks for everything’ signature from Julie Newmar for all the years I’ve known her. And we both got our wishes. And so then I did something utterly ridiculous: I cried. I cried all the way walking back through the convention centre. I should note that this crying fit happened literally 20 minutes after I’d just rolled my eyes at another poor sod who’d been so excited to meet Nathan Fillion, she’d puked. I mean, at least I didn’t puke...but I know Ms Newmar saw the tears starting in my eyes, and I don’t even mind.

Anyway, Jenny Lawson, if you read this: you were represented, in spirit, at the Ottawa Comiccon this weekend. I didn’t actually mention the web address of your blog because a) Julie Newmar doesn’t strike me as an online reader, and b) I couldn’t bring myself to recommend a blog with taxidermied costumed rodents and a lot of vaginal humour to a woman who wears a fascinator to a comic book convention. Maybe next year I'll do this again, though...same bat time, same bat channel. 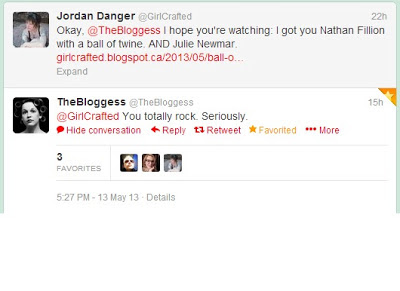 And I saw the tweet after a particularly sweet and lovely date with Alan, and generally was in such a happy place that I think I might have turned into a ball of happy orange light and imploded. But I'm still here this morning, so I guess I've got more work to do.