I’ve had this terrible head cold, which mid-week decided to move into my upper chest. It morphed into some sort of voice distortion virus, so suddenly I sounded like Marge Simpson. A day or two later, it sank further into my chest and became a terrible barking cough, so I went to the doctor, who informed me I have croup. Yes, croup is normally found in tiny children, but my doctor explained that all it would take is for some snotty kid to cough in his hand, touch a doorknob, and voila!—Jordan touches the same knob, touches her face, and is infected. It was kind of my doctor to offer this explanation, but I distinctly recall pretending to ‘eat’ the nose of a sick little girl named Blueberry just a few days before. I would wager that direct contact with toddler snot is even more effective in transmitting the virus than a doorknob.

Anyway, in an effort to feel less like a sick, disgusting beast, I decided to have a shower and shave my extraneous body hair, which I’ve been ignoring for a little too long. I shaved one armpit and came away with almost no stubble, but the other one clogged up the razor. So now I’m trying to figure out how many times I forgot to shave just that one armpit, and who would have noticed.

I also made a stop at the pharmacy to pick up the medication my doctor prescribed, and figured I’d look at lipstick while I waited because I recently lost my favourite tube. I haven’t had time to hit a store for new lipstick in weeks, so I was kind of excited to have a few minutes to finally pick some up. I found the display, pulled open the drawer, and discovered that they were entirely sold out, except for this one tube:

It’s important to know your limitations when you’re sick. For instance, maybe leave the laundry for another day. I mean, it’s up to you…but you may get ¾ of the way through a load and suddenly remember that your laundry room sink is plugged, and you may run downstairs to find you’ve flooded your basement. I mean, maybe that would happen. You know…to a total dork.

I also had this great Facebook chat conversation with MJ, which I am just sharing straight-up with ya’ll here.

I have a cold but I also have croupe!

Coupe? Because you're 6 months old? lol

Weren't those the turtles in Super Mario?

I remember on Anne of Green Gables they had ipecac for it.

Yes, I am apparently a toddler. Croup is for babies.

Well, good job going and getting diagnosed. What now?

Doctor was like, "People cough, then you touch the same door, then you get it." I was like, hmmmm Or you get it much more directly by, oh I dunno, MUNCHING A CHILD'S SNOTTY FACE.

So now you can’t eat your friends noses either.

The world is limiting.

So I have to go dig out the car [from our giant snowstorm] and get a puffer.

A fish would be amazing

Yes, that would be a much more interesting remedy.

I'm picturing you yelling at it to make you well.

So he deflates in defeat. 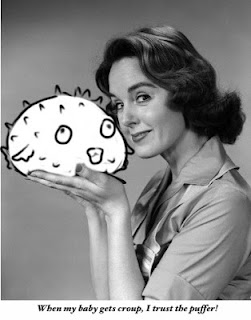 Then I squidge its sides so it blows into my mouth?

lol I will try

Hope everyone else is having a healthy, catastrophe-free start to their holidays.