Aging for Men Vs Women: the scary truth

SILVER FOXES AND UNDEFINED WOMEN: AGING FOR THE SEXES

My friend Bob writes a column called ‘Guyside’ on a blog that is primarily about women in the menopause years. He provides a male perspective on aging, and I really enjoy his posts. He wrote one last week that threw me off, though, and it took me a while to understand why.

Bob talked about male body image in relation to aging. I found myself sneering as I read his heartfelt words. I figured my far-from-menopausal cycle was affecting the portion of my brain responsible for empathy (this really does happen to me), but upon further consideration, here’s what I came to realize:

I don’t see how men have self-worth issues as they age.

As a man gets older, he may lose muscle tone or hair, but there’s no expectation for him to cover these things up with makeup, dye, and the elusive ‘flattering’ outfit. Indeed, men perfected the suit hundreds of years ago, and never looked back. The only real change to the perfect male look seems to be the width of ties and the length of facial hair. Men of every age seem to have women who will happily date them. Not so for women. Why? Because as men age, they gain other ‘gold stars’ in life: a career, professional honors, possessions, emotional maturity, and stability. Oh, and of course, there’s a desirable mature male aesthetic as well: the ‘Silver Fox’ look.

Meanwhile, as a woman ages, she hits her glass ceiling at work, realizes her salary won’t ever match those of her male colleagues, sees that she’s lost momentum during her time raising kids and/or caring for elderly parents, has been accused of losing her emotional wherewithal through the menopausal process, and is never considered as ‘stable’ as a man, financially or mentally.

Yes, this is a generalization. Bear with me; we’re looking at a broad issue here.

As I was thinking about the issue of male aging, I realized that I could reassure Bob with many examples of Silver Foxes who show that aging can be incredibly sexy, inside and out, for a man. Pierce Brosnan, George Clooney, Denzel Washington, Hugh Grant, Colin Firth, and what seems to be every Baldwin man…these are all examples of men who just seem to improve with age. But when I tried to reassure myself with similar images of older women, I could think of virtually none. Ellen Degeneres? Sure, though I see her as a bit of a one-off. Helen Mirin? Okay, if you want to set yourself up for impossible self-expectations…because the chances of your ‘Change of Life’ leaving you shaped like Mirin is about as likely as Gerard Butler showing up on my doorstep, today, and begging to marry me.

I waited a minute to see if it would happen. It did not.

The reality is, even outside of the celebrity world, I have a hard time picturing what the female equivalent of a Silver Fox would be. We just don’t esteem mature women the way we do men. This is a bit terrifying now that I’ve realized it, because I have a much better understanding now of why there is a gap in my mental projection of myself: I can picture myself at 35 (cute hair, tall boots with a skirt, heading into an important meeting before I take off to my afternoon yoga class), and I can picture myself at 70 (crazy silver dreadlocks, arts-and-crafted house with a wild medicinal organic garden, running a workshop in a small town where I upcycle vintage furniture), but I have no idea what I look like for the 25 years in the middle. 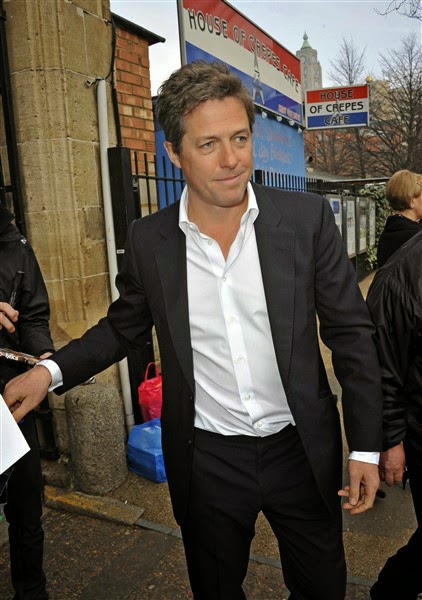 So while I can understand Bob (and other men’s) fears of aging, I think they’ve got a lot more examples out there showing them that aging men are still a desirable and productive part of our culture. Meanwhile, the closest thing I’ve got to a real-life role model for my 50’s is a handful of ex-supervisors wearing uncomfortable polyester pantsuits, sporting that standard puffy short haircut, wearing coordinated jewellery sets, and catering to male bosses’ whims by spending their lunch hours seeking out the right Keurig cups.

I think you’ll be fine, Bob. But you’ve certainly got me worried now.